The CW has released new photos for “O Come, All Ye Faithful”, the seventh episode of The Flash‘s fifth season. 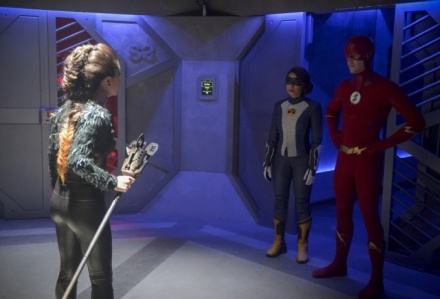 The episode seems to be The Flash‘s latest holiday episode, which will fall before the show’s 100th episode on December 4th and the final installment of the “Elseworlds” crossover on December 11th. And judging by the looks of things, Team Flash’s Thanksgiving will have a pretty interesting twist to it, with the arrival of Weather Witch (Timeless‘ Reina Hardesty).

In the comics, Weather Witch is a former sex worker who gets transformed into a New Rogue by the Penguin. Her time as a supervillain was relatively short-lived, as she was killed by a lightning bolt by the Weather Wizard soon after. It looks like The Flash‘s version of Weather Witch will take a decidedly different twist, with her being the daughter of Mark Mardon/Weather Wizard (Liam McIntyre).

There’s a bit of serendipity in Weather Wizard factoring into The Flash‘s 99th episode, seeing as he was the first real foe that Barry crossed paths with in the series’ pilot. And seeing as the show has teased the possibility of doing a younger version of the Rogues, it will be interesting to see exactly what Weather Witch’s role in things is.

The photos also hint at some new content related to Orlin Dwyer/Cicada (Chris Klein), the mysterious metahuman killer that the team has been tracking down all season. Several of the photos show Orlin with Grace Gibbons (Islie Hirvonen), who appears to be the young woman Cicada has been visiting in the hospital. It remains to be seen whether or not Grace is Olrin’s daughter, or if these scenes will be a “Therefore I Am”-style flashback sequence, but it sounds like fans will get some answers in one way or another.

“There’s a reason why Orlin is doing what he’s doing.” Klein explained in a recent interview. “There’s a reason why as Cicada he wants all metahumans to die. We will learn what that reason is, and we’ll get to judge Orlin for it. One of the coolest things about The Flash is that with every villain, the fans get an opportunity to judge them on their merits. Every villain has a reason for being, and Orlin’s is a pretty heavy one. This guy comes with a lot of sadness. It’s going to be a tough fight for Team Flash, because Cicada has this dagger that dampens metahuman powers.”

You can check out the synopsis for “O Come, All Ye Faithful” below!

The Flash airs Tuesdays at 8/7c on The CW. “O Come, All Ye Faithful” will air on November 27th.