The comic book The Brave & the Bold ran for 200 issues from 1955 through 1983. During its run, the best writers and artists in the business introduced us to comic book icons still published today – including the Justice League, the Suicide Squad and the Teen Titans.

The Brave & the Bold: From Silent Knight to Dark Knight is an issue-by-issue guide to one of the most influential comic books of the Silver Age and its later volumes, revivals and reprints, up to and including the comic based on the recent excellent animated TV show.

Michael Curry, author of Abby’s Road, The Long & Winding Road to Adoption and how Facebook, Aquaman and Theodore Roosevelt Helped and Toddler TV: A Befuddled Father’s Guide to What the Kid is Watching, uses his gentle (and sometimes not-so-gentle) humorous writing style in a more serious way as he guides us through an index of one of his first loves: comic books! More specifically, the Brave and the Bold!

Meet some old friends and long-forgotten characters as the author celebrates one of the best comic books ever printed! 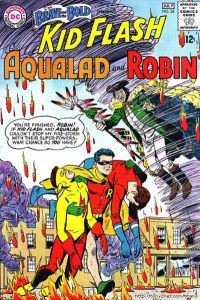 Available as a FREE ebook at Barnesandnoble.com, Smashwords and other online stores!