“The Master Machinations of the Missile Men!”

Green Lantern’s ring helps Gold restore the rest of the Metal Men (Tin is strangely MIA during the other’s restoration). The team heads for the moon to rescue Platinum.

Meanwhile, Doc Magnus reveals the Inheritor – a synthetic robot Doc was building in the past issue – with all the powers of the Metal Men and more! Doc sends the Inheritor to the moon to do battle with the Missile Men.

The Metal Men attack and defeat the Missile Men’s leader, based on an observation by Lead of their potential weakness. The leader is destroyed and the remaining Missile Men are rendered inert. Platinum is rescued and all is well.

Oh wait, the Inheritor is on his way … to be continued.

It is at this point that Joe Staton stopped trying to draw like Walt Simonson and used his own style on the Metal Men (although you could see glimpses of his style readers of Showcase, Superboy and All-Star Comics have seen for a while now! 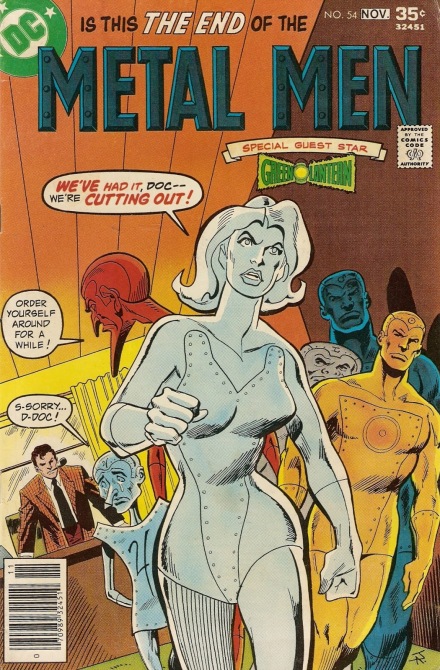 The rest of the Metal Men join Platinum’s walk-out at the end of the prior issue. We later learn that it was with Doc Magnus’s blessing!

Meanwhile, the Guardians of Oa tell Green Lantern that the Missile Men are invading planets and stripping them of all metal! They are heading to earth! GL discovers them on the moon, where the leader tells the other Missiles they were created only for the pleasure of their queen – Platinum!  The leader of the Missile Men has had a thing for Platinum since issue #5.

Green Lantern wonders if the Metal Men are involved in goes back to earth to find them, not knowing he is a pawn in the Missile Men’s plan!

Green Lantern greets the Metal Men; but the Missile Men leader changes what the robots hear – GL threatening our heroes instead! A fight ensues with Lantern getting the best of Lead, Iron, Platinum and Mercury. Gold (being yellow based) smothers GL, leaving only himself and Tin alive in the final page cliff-hanger!

The letter column printed letters for and against the “tongue-in-cheek” approach to the comic. The editor mentions that with Gerry Conway back at the typewriter, a comic will see a more serious approach.

About the author: Michael Curry is the author of the Brave & Bold: From Silent Knight to Dark Knight, The Day John F Kennedy Met the Beatles and the award-winning Abby’s Road, the Long and Winding Road to Adoption and How Facebook, Aquaman and Theodore Roosevelt Helped.  Check his website for more releases

“The Hand that Shocks the Cradle Rules the World”

The Brain Children trick Doc into thinking the Metal Men are greeting him at the entrance of Happyland, but Platinum warns him of the trap! The children affect with Doc’s mind and drives him insane! Tina and Iron dispatch the babies incurring the wrath of Strangeglove.

One of the babies rebels at being nothing but a slave and sabotages the Helix Ray.

In the meantime, we learn the origin of Strangeglove: the nuclear explosion fused a typewriter to his hand giving him strange typewriter-based powers (remember this is the “tongue-in-cheek” style of the MM).

To punish the rebellious baby Albert, Strangeglove points the Helix Ray at him, turning the infant into a huge angry baby! Doc convinces the other Brain Children to also rebel. They release the General and Johanna from their cages and restore their minds and turn Strangeglove into a slobbering, gibbering baby.

In the end Tina wants to adopt the genius babies to help Doc Magnus. Doc says no – Platinum is only a robot and will be unable to mother the babies. Platinum, in a fit of pique, quits the Metal Men!

The letter column printed only two letter this time, again debating the recent “tongue-in-cheek” approach to the comic.

“Doctor Strangeglove and the Brain Children”

Doc’s friend Johanna, tells the story of Happyland – an amusement park turned into a pre-natal laboratory. Johanna’s sister was killed at the facility when the nuclear reactor powering the plant exploded, also killing her sister’s unborn baby. Yet, lately Johanna has been getting letters from her nephew…

At first, she asked for General Caspar’s help, but she hasn’t heard from him in weeks.

Magnus and the Metal Men split up – Iron, Tina and Doc will find Caspar; the others to Happyland.

Approaching Happyland, Gold, Mercury, Tin and Lead are blasted out of the sky by soldiers guarding the Happyland facility!

Meanwhile, Doc, Tina and Iron discover the General’s notes about Babylab, located at Happyland. They are shot at by guards, but safely escape after knocking them out.

The other Metal Men have also survive their crash and head into Happyland.

Throughout the story we see the shadowy Dr. Strangeglove and his super-intelligent infants. Strangeglove confronts Johanna’s nephew, Dennis. Dennis shoots a mental blast at Strangeglove – who reveals the secret to his name – his right hand (shaped like an old typewriter) emits power blasts of its own! Dennis manages to escape.

Dennis is killed by the mental blasts of the other Brain Children and Johanna and the Metal Men are captured by Strangeglove. The evil doctor and his children watch Magnus, Platinum and Iron fly to Happyland to the rescue.

If they can survive the Helix Ray!!! To be continued!

The letter column printed only one missive – and asked the readers for more input! The letter and the answer explained the “tongue-in-cheek” approach to the comic announced in the previous issue.

Tongue in cheek? It was deadly serious to me at the time! I enjoyed this run of Metal Men, and now I can see the parody that Marty Pasko wrote into the series. The writing is more than silly and less than serious.

Joe Staton’s art is looking less like Simonson’s and more like his own familiar style. And still Wonderful!

“Killing Me Softly With His Scream!”

#50 had new material book-ending the excellent reprint of MM#6. Remember, this is a blog about the Bronze Age – there is no place for even an excellent Silver Age story here!

The new story in #50 (Consisting of only just over two pages) was as follows: Magnus and his robots are ordered to a secret military base wherein lay “Project Automaton”. When they arrive, they are informed the Metal Men are now in the custody of the US Army!

The robots are locked into a chamber while Colonel Craven tries to convince Doc Magnus to use his robot building technique for Project Automaton. An attack on the Metal Men by unknown armed terrorists is foiled by our friends, and one of the unspeaking attackers kills himself during the interrogation.

We meet Vox – a man with a mechanical jaw and voice box whose scream can kill and who is building a cyborg army for America’s enemies. Vox and his cyborg army invade the army base to capture Magnus and the Metal Men. The robots fight off the cyborgs, but Vox manages to make off with Magnus, Iron and Colonel Craven! Vox demands the secret on how the Metal Men can alter their forms – with this knowledge his own cyborgs will be invincible!

Magnus refuses to tell his secret – but Craven tells Vox in exchange for a mechanical heart to replace his pacemaker! Craven tells Vox about the Metal Men’s responsometers, that allows them to change their form. Vox refuses to honor his end of the bargain and his heart gives out in his rage.

The Metal Men trick the Cyboriginals (Vox’s cyborg army) into leading them to where Vox is keeping Magnus and rescues him.

The letter pages ranged from complimentary to scathing in their reviews of issue #49, which the editor says is the start of their new “tongue in cheek” version of the Metal Men. Did I read the same issue? That was part two of the Eclipso story … tongue in cheek? Wha…?

I suppose this issue shows the “tongue in cheek” direction of Metal Men. A strange villain, true, but not in the goofy mode of, say, Plastic Man.

The eclectic story is magnified by the dual writers. The prior issue said Harris came in to help with Pasko’s plot.

The artwork is fine and solid – a good description of the style of Joe Staton. His fluid style complements strange plottings of the story in addition to the Metal Men themselves. Staton captures their powers and abilities cleanly and clearly. By this time, he has already become the Bronze Age artist for all things Earth-2 and will shortly become THE Green Lantern artist. He is currently doing his usual thorough workman-like job for the Dick Tracy comic strip.