Guardians of the Galaxy: not a review, just some thoughts…

What gives, Mike? You boast that your blog is about comic books, science fiction, fantasy and all things nerdy and what have we gotten lately? Reviews of historical fiction, updates on your book Abby’s Road (now available as a Nook and in paperback from Amazon – gee, this corporate whore stuff is getting easier and easier!) and blogs about your health!! Where’s the nerdly goodness!?

OK, OK, good point. This will make up for it. It has Marvel, Star Wars, Superman, lots of memes and links to websites – geeky enough for ya? 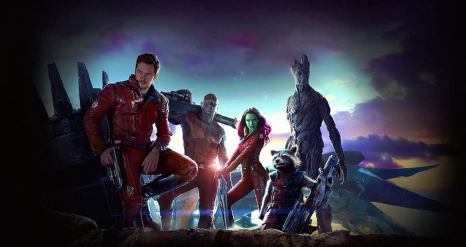 Along with .02% of the world’s population, I saw Guardians of the Galaxy this weekend. I enjoyed it very much – I will likely get the blu-ray when it comes out and will look forward to its inevitable sequels.

The web is filled with reviews of the movie – Entertainment Weekly gave it a wonderful review and an A- rating. That’s the magazine’s highest rating possible for a non-Harry Potter or non-Tom Hanks movie. This blog review is probably the best and closest to the truth:

(really captures the feeling while watching it, doesn’t it?)

So I’m not going to review the film itself – there’s plenty of those out there. Instead I’ll share the thoughts that popped in my mind before and during the film whilst munching my popcorn.

1) this is Marvel’s first foray into its current movie blitz with unknown characters. I’m a big comic book fan, but even I did not know much about these characters. My Marvel Universe knowledge is not as great as some, I will admit. And my knowledge of current comicdom (especially with the “Big 2”: Marvel and DC) is certainly lacking. But if you are stuck on a game show question regarding DC in the 1970s, phone-a-friend me.

We’ve seen all the Marvel big guns lately from the various film companies that own the rights – X-Men, various Avengers (Thor, Captain America, Iron Man) and Spider-Man. (And I think it’s time – especially considering the success of Guardians – to give serious thought to a Fantastic Four redo).

I wouldn’t put the Guardians even on Marvel’s second tier – they’re third or fourth-rate characters down there with the Squadron Supreme, Omega the Unknown and Night Nurse (don’t ask).

“Horse Hockey!” you say. “I’m a huge fan of the Guardians! And they have a fan base that makes the Legion of Superheroes pale in comparison!” I’m glad you enjoy it; and no, they don’t.

I barely knew most of the characters: Star Lord was more a science fiction than a superhero character from the Marvel magazine line. Gamora was a secondary character from Jim Starlin’s superb Warlock saga. Drax was a villain who fought Captain Marvel (Marvel’s Captain Marvel, not the Shazam guy), Rocket Raccoon came along during the 1980s when I stopped reading most “Big 2” comics who was in (I think) the Hulk comics. Groot was in a few Marvel horror comics in the 1950s and 1960s: one of a long line of atomic monsters with names akin to onomatopoeias of bowel movements (“Behold the Terror of Vluum!” or “And Now Comes Splart!”).

And this is ME, who is a bit of a comics historian! I, along with most movie audiences, walked into this film with NO expectations or knowledge of the character’s history. Captain America these folks ain’t. No baggage or history to fume over. “But Bucky was a kid!” “Nick Fury’s BLACK!!??”

THESE were my Guardians, published at the beginning of my comic book fandom: 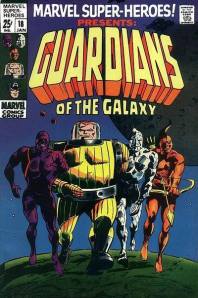 Recognize and remember any of them? Frankly, neither do I.

So if the producers wanted to coast – they certainly could have. With expectations much lower than with the Avengers (expectations they met, by the way), there was no reason they needed to put on their A-game. Let’s have some fun, make a good story, use the budget we have and be satisfied with a job well done. The movie-goers would say, “It has a lot of heart and I liked it.”

But they put on an A-game. They put as much time and consideration into all parts of the movie as they have with each of the Marvel franchise movies to date. Instead of making a movie that was good (“At least it was still better than the two Hulks”), they made a movie as good as Avengers or Winter Soldier.  They kept the fun in while telling a good story, too. The movie goers said, “It has a lot of heart and I LOVED it!”

Putting humor in a science fiction movie is a dangerous thing to do. It could very quickly turn campy. But here (as with any good story) the humor was driven by the characters. The storyline was played straight – the humor came from the character’s reaction to their situation. This is where most humor works well and kept us riding along. It kept us connected in this alien setting. 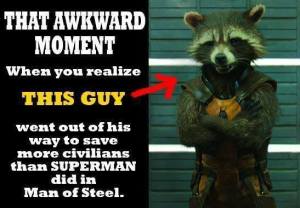 3) A peaceful world attacked by a brutal and near-omnipotent overlord and his powerful minions. Spaceship dogfight battles! Swordfights! Blasters blasting! Wretched hives of scum and villainy! 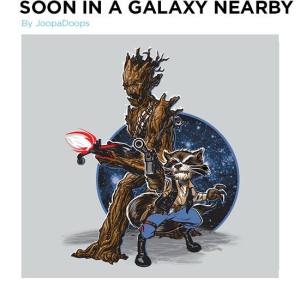 The producers of the new Star Wars movie are tugging at their collars right now. “Eep.” Stop production right now, take pad and pencil and everyone – that means you, too, Hamill, Fisher and Ford (someone may have to help Harrison limp along) – go see it and take notes. And don’t sit near the producers of the upcoming Superman vs Batman movie – you’re there to learn how it’s done, not to listen to them mope about “but at least we have a built-in audience of basement-dwellers …”

4) There are lots of 1970s tunes on the soundtrack. I didn’t like that too much when I first heard about it – it would lend to camp – but it fit. It gave us a connection to the main character (the only earthling) and linked us normal earthlings to the story. It was also cannily explained in the movie too. I liked that – too many movies forget about things like that!

But it got me thinking about creator’s rights. During the movie and afterward I said how ironic that David Bowie and Eric Carmen will probably make more money from this film than Jim Starlin (who created Thanos and Gamora) and Bill Mantlo (Rocket Raccoon) will.

This story is making the rounds:

The brother sounds a bit too satisfied, doesn’t he? He was likely blinking “SOS” into the camera.

Go see it. Enjoy yourself during a movie. That will make for a nice change, won’t it? Go home and read about the actors and the history of the characters and the movie. Give Bill Mantlo the exact amount you spent on admission and snacks as a donation. He needs it. http://gregpak.com/love-rocket-raccoon-please-consider-donating-to-writer-bill-mantlos-ongoing-care/

Then eagerly await the sequel. I’ll be in line with you. 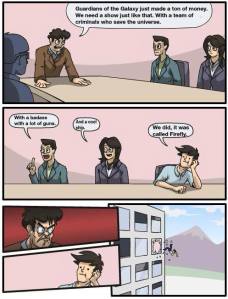 One thought on “Thoughts on Guardians of the Galaxy…”