My sister Kathryn asked if I was going to include Christina Crawford. I said I was and would move her up the schedule a little …

November is National Adoption Month! Throughout the month I’ll feature famous folk who have been adopted! And now a view from the dark side…

Christina Crawford (born June 11, 1939) is a writer and actress, best known as the author of Mommie Dearest, an autobiographical account of alleged child abuse by mother, actress Joan Crawford.

She was born in Los Angeles, California to unmarried teen parents.

According to Christina; her father, Larry King (yes, THAT Larry King), supposedly in the Navy, was married to another woman while her mother was unmarried. Christina Crawford was adopted from a baby broker in the state of Nevada because Joan Crawford was formerly denied an adoption by Social Services for being an unfit candidate in California in 1940. Subsequent documentation showed that the adoption was handled by Georgia Tann through Tann’s infamous Tennessee Children’s Home Society. Christina was one of five children adopted by Joan Crawford. 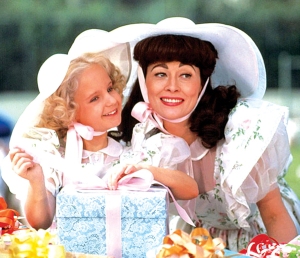 One photo I selected had the fabulous Faye Dunaway as Joan Crawford (also pictured above) wielding a wire hanger. I also found the wonderful Gilda Radner in the classic Saturday Night Live skit spoofing Mommie Dearest. But I decided not to use them in this venue. Mean-spirited humor has its place, and I can be as mean as the next guy. But then again, child abuse is never funny. Never.

Be sure to visit Abby’s Road on Facebook for more Spotlights, such as Gary Coleman and Nancy Reagan!