A review of The Hobbit: Battle of the Five Armies

from Seven Chapters, shown in Three-D

This review contains mild spoilers of the movie as well as MAJOR spoilers of the five prior Tolkien movies by Peter Jackson … I tried to make this pretty safe to read. Keep in mind, this movie is based on a work that is seventy years old, available free online and is a major piece of fiction in Western Civilization, to complain that I “ruined” your pleasure by revealing facts of the movie is just plain silly.

If you don’t know the outcome of the story by now, or that Darth Vader is Luke Skywalker’s father, the chick in “The Crying Game” is really a man, Rosebud was a sled, and/or continue to be tricked by any plot twist of a movie from M Night Shamalamadingdong movie; you need to crawl back into your cave…

Note: to avoid confusion, book titles are underlined, “movie titles” are in quotes…

Just as you should watch the first two films before seeing this movie, you need to read my blogs about the prior films first! 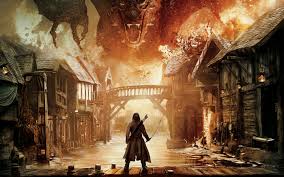 Christmas Eve day we planned on seeing the third movie of Peter Jackson’s version of “The Hobbit”. This third installment is called “The Battle of the Five Armies”.

On the way to the theater my daughter’s day care called and said she was running a fever. We brought her home, gave her some medicine (her pediatrician called back right away and called in a prescription quite quickly!) and she felt better by Christmas Day. During the 24th she was quiet and mellow and spent most of the afternoon lying on the couch or snuggling with Mommy and/or Daddy.

Just before her afternoon nap my wife said I could go see the movie by myself if I wanted to. I didn’t. I wanted to see it with her. But all I would otherwise do that day, just as my little girl would do, is to sit around the house and lie quietly … I was going to see the movie again on New Year’s Eve Day when my wife worked and I did not … it would give me a chance to do some last-minute Christmas shopping when it was over.

We missed the 10:00am show, but there were more at noon and 1:30. The noon showing was in 3D. I had never seen a modern-day 3D movie – the last one I saw was one of the Nightmare on Elm Street thingies from the 1980s. And the noon showing would get me out of the theater sooner and home by four or so …

I watched the first Hobbit movie many times in the theater and on blu-ray, and although I have the second one in disc, I had yet to watch it! I haven’t seen it since it was in the theaters! The weekend before I watched the second movie again. Because of the new material in the movies and the cliff-hanging ending of the second movie, I was afraid I would be a bit lost watching this third movie at first. I’m glad I watched “The Desolation of Smaug” to refresh my memory.

Earlier in the month of December, on a whim, I decided to re-read The Hobbit novel -I had not read it since I was in New York during the birth of my child; and then it was only the second time I read the book (I have read Lord of the Rings five or six times by now…). I finished it that weekend – the evening after I finished the book I watched the second movie.

“Why!?” the nay-sayers shout. “This travesty has nothing to do with the book!” Not altogether true. The movies are wonderful fun. There are new scenes and characters, true, but as I said in my previous blogs … who cares? Who wouldn’t want to spend more time on Middle Earth and meet new friends?

And I’m glad I read the book again. It helped me remember what happened – Thorin’s gold-fever and who survived (and who didn’t survive) the battle.  The deaths of some of the friends we made during this series is fore-ordained – what about our new friends? Whither their fate? Hmm?

“Battle of the Five Armies” picks up right after “Desolation of Smaug” ended. Smaug wings his way to Laketown – convinced they were in on the dwarves incursion into his mountain. Bard, the human fisherman/smuggler descended from the ruler of Dale (thus making him an early draft of Aragorn), is locked away in a Laketown cell.

Smaug’s attack is awesome in the adult sense of the word.  Terrifying. Stephen Frye returns as Laketown’s Master whose escape tries to provide comic relief, but we are too swept up in the townspeople’s attempt to flee to really laugh at the Master and his toady Alfred’s cowardly acts.  Alfred becomes a thorn in Bard’s side throughout most of the movie. Not as inherently evil as Wormtongue from “Two Towers”, but just as oily …

Bard escapes, finds his family, retrieves the black arrow and faces Smaug. The result is similar to the book and to anyone who saw its obvious foreshadowing in “Desolation…”.

Then the credits roll…

The next third of the movie builds up the war envisioned in the title.  As in the novel, Bard and the Laketowners make refuge on the shore and ask Thorin’s company for reparations. We see Thorin’s descent into gold fever (or dragon sickness as it is called in the movie) as he refuses to keep his word to the Laketowners. His fever grows as he demands his company find the legendary Arkenstone amongst the treasure hoard, eventually suspecting even his kinfolk of duplicity – an act unthinkable in dwarves to their allies and kin.

Thranduil, the elven king from Mirkwood, and his army of elves appear with supplies for the Laketown refugees.  Rather than being beneficent, as in the novel, Thranduil comes to the Lonely Mountain to get back his people’s diamond jewels kept there.  Thus he and Bard demand what they think is rightfully theirs.  The audience believes this, too.  The film does a convincing job showing us Thorin’s greed without making him a true villain.  Bilbo and the other company often remark (even to the great King’s face to their peril) that this is not the Thorin they knew and followed loyally.  We side with the men and elves, but sympathize with the dwarves.

Orc armies are marching to Erebor (the Lonely Mountain). In the novel, they marched when they learned Smaug was dead and his treasure hoard was up for grabs! Here, the reasons link in with the ”Lord of the Rings” movie trilogy …

When we last left Gandalf in “Desolation…” he was the caged prisoner of the Necromancer, revealed to be Sauron.  He watches Azog’s orc army march to Erebor at Sauron’s command. The Lonely Mountain is of strategic importance (Sauron has no need for coins and baubles). It is the initial step in his conquest of the West.

Gandalf escapes in a thrilling battle between the Ringwraiths and the White Council. After five movies we finally get to watch Elrond and even Saruman kick ass. Galadriel’s confrontation with Sauron is terrifying and well done – reminding us of the glimpse of her true power in “The Fellowship of the Ring”. The look on Saruman’s face when Sauron appears makes the movie fans giggle in delight: is this the point he begins to turn to the dark side? Has it happened already and he stops fighting when his master is revealed?

Bilbo attempts to negotiate a peace, by “betraying” Thorin. By now we are, of course, on Bilbo’s side here, so the betrayal was from Thorin, not the hobbit. The negotiation tactic does not work, Thorin is even MORE infuriated and he and his dwarven companions prepare for war…

In honor of the movies, this review is split into two unnecessary parts …

One thought on “A late review of The Hobbit: Battle of the Five Armies”