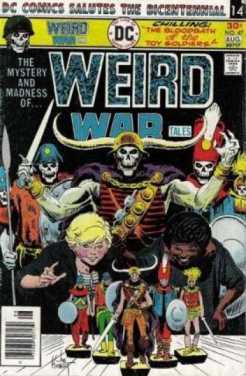 The Reese’s Peanut Butter Cups of comic books. “You got your horror comic in my war book!” “You’ve for your war book in my horror comic!” I loved this comic book, just LOVED it! It combined the two genres at which DC excelled!

Weird War Tales debuted in September 1971 and lasted 124 issues until June of 1983. It was an anthology of supernatural stories set during a war. Any war. Vikings, Nazi’s, Yanks & Rebels and post-apocalyptic tales were represented.

Although not a “personality” such as Cain, Abel or Destiny, the comic was “hosted” by death – a skeleton dressed in a uniform appropriate for the story.

By the 1980s, regular features or “stars” were introduced – alternating between GI Robot, the Creature Commandos and the War that Time Forgot (dinosaurs) – sometimes alternating between features, sometimes teaming with each other. By that time, though, it had lost some of its horror pedigree in favor of more quasi-superheroics.

“Bloodbath of the Toy Soldiers”, George Kashdan ( w ), Rubeny (a)

In a fit of pique, Arax destroys the toy soldiers. When Arax finds Zeron playing with one last toy soldier the boy kept hidden, the general, Arax throws it in the fire.

Arax melts along with the toy replica.

“The Day After Doomsday”, Steve Skeates ( w ), Paul Kruchner and Tex Blasdell (a)

The sole survivor of the Great Atomic War hears a cry for help in the rubble. He digs and digs and finds a tape recorder accidentally turned on in the shifting debris replaying a radio soap opera, “Help! Help! Unhand me you brute!” In frustration, he bashes the tape recorder against a wall, causing the fragile masonry to give way and crush him.

This two-page tale is reprinted in the trade paperback “Showcase Presents: the Great Disaster featuring the Atomic Knights”.

Hulgar, the elderly Viking, duels Godfred to prove he still is a warrior. Eric, son of their leader Ottar, begs for mercy for Hulgar. Ottar grants it.

During his first raid, Eric panics and is branded a coward. Holgar gives Eric the Shield of Thor that will make him invincible! With the shield, Eric defeats Godfred to earn his place in the next raid. Eric fights bravely against the British, but is killed.

Linus Sabalys, Lavel PQ, Canada; positive comments on some stories, negative for others.

Mark Schmieder, Concord, MA; the editor points out that Mark has the opposite view as Linus Sabalys on every story.

The column has a plus for Star Spangled War Stories #200 starring the Unknown Soldier and Enemy Ace.  ), but with no mention of any Bicentennial connection (see my previous blog about the missed opportunity to hype a 200th issue during the Bicentennial)