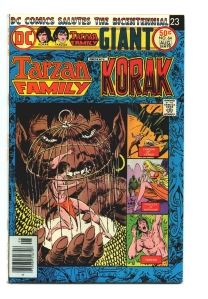 Tarzan Family began as Korak, Son of Tarzan from Gold Key Comics and first published in January 1964 until issue #45 in January 1972. DC Comics bought the rights to the Korak character as well as his more famous father and continued the son’s comic with the original numbering (#46) beginning in June 1972 until #59 (October 1975). The book was renamed Tarzan Family while continuing the sequential numbering until it was cancelled with issue #66, December 1976. This was part of a “Family Series” DC launched in 1975 as companions to Superman Family (which had debuted the year before – an amalgam of the Lois Lane, Jimmy Olsen and Supergirl titles): Tarzan Family, Superteam Family and Batman Family. They were “Giant” comics containing mostly reprints for fifty cents, with the lead story (and sometimes a second feature) as a new piece.

Tarzan Family featured Korak in a new tale and reprints of a Tarzan Sunday strip as well as reprints of the comic book adventures of other Edgar Rice Burroughs creations such as Carson of Venus and John Carter of Mars from earlier issues of Korak or other DC comics.

Korak the character, the son of Tarzan and Jane Porter, appeared first in the Tarzan novels and movies (although in the popular Johnny Weissmuller movies he was replaced by the adopted “Boy”).

Korak is still searching for his lost love Meriem, his search takes him to the peak of a high mountain where he is snatched up by giant Roc. The bird flies him to a hidden kingdom of giants. The King orders Korak be sacrificed, but his daughter is charmed by the little “doll” and wants him for her own. If the priests agree, she may have him.

Korak watches as a Vestal is sacrificed to the gods. If it rains, Korak may live with the princess; if it does not, he must be sacrificed.  There is much thunder and lightning, but no rain. Guards come to carry away Korak, but with the help of the princess’ diamond, he escapes. The princess puts Korak back into his cage and escapes with him into the wilderness.

A John Carter of Mars tale. John Carter and Tanna, Princess of Barsoom are transported aboard an alien spacecraft. The aliens heal Carter and tell him to be their spokesman as they promise to cure all Barsoom of their ills in exchange for their fealty. He refuses, breaks free of their force field, takes command of the ship and crashes it back to the surface of Mars. As he and Tanna leave the ship, an ominous shadow covers them; they turn to face their new adversary …

This was a new tale continued from the previous issue and to be continued … but never concluded … the storyline was never finished!

A reprint of a Tarzan Sunday newspaper strip with Joe Kubert art and story bookending the tale. There is no indication of where each week’s strip begins or ends; is it one strip per page? Heavily edited to fit the standard comic book page? Perhaps, perhaps not, but the storylines jump without much explanation…

Tarzan rescues a bull elephant from the Sahara desert, leading it back to the jungle. He then rescues a baby gorilla from a Pangolin (a lizard). Tarzan fights off the baby’s father Do-Ag. While they battle, a rogue gorilla named Bu-Gash swings off with the baby and his mother. The baby falls and breaks its leg – certain doom to a species unable to heal one another. Tarzan mends the leg and Do-Ag and Bu-Gash do battle. Bu-Gash is defeated and flees the tribe.

Meanwhile, Korak helps Nubilia become chieftess of a human tribe, having helped oust the tyrant chief Imbaza (the coup is never shown; presumably it was in a previous strip not published here). Korak questions how a supposedly peaceful ruler commits murder to obtain a throne.  Leaving the village, Korak watches a hippo save an antelope from the jaws of a crocodile – animals helping each other out of instinct? Can man learn this? Korak then swings into the midst of a battle between two apes vying to be king of their tribe. “Tarzan is coming, Leave us,” says one ape. “That is what I intend to do,” says Korak.

Carson of Venus tale reprinted from Korak, Son of Tarzan #50 (February 1973). Descending from the Venusian trees, Carson bids farewell to his dead friend Kamlot. But Kamlot is NOT dead – merely paralyzed from the spider-beasts venom! Together they kill a basto – a gigantic boar – for their meal! They are then both captured by Klangan – bat-winged creatures – and flown as captives through the forest to a vast Venusian sea.

The Ape Vine: a half-page letter column discussing mainly issue #62. Letters by Steve Kalaitzidis of Toronto, Ontario (spotting an error – John Carter fights a race from Edgar Rice Burrough’s Carson of Venus tales), Mark Schneider of Concord, Mass (positive, but criticizing the sameness of the Carter/Carson stories – the editor says considering the previous letter, that makes sense!) and David L Klees of Newton Centre, Mass (asking for a tabloid-size edition of the Hal Foster Tarzan strips – I would have agreed! They did a tabloid of Dick Tracy, why not a Tarzan reprint? Alas, it was never to be…). E. Nelson Bridwell answered the questions and announced this was Joe Kubert’s last issue as editor. Joe Orlando takes over with the next issue. After that, there would be only one issue left before cancellation.

One thought on “Tarzan Family #64: the Bicentennial blog continues!”