My review of Supergirl begins here.

I love the show, I do, but it is not without its problems …

Cat Grant (a character from the Modern Age (post-1986) of Superman) is one of the few characters that tend to plod down the story. She’s not a villain, in fact she is key in getting the world to love Supergirl and not fear her, but is still cold and self-centered CEO.  She is shallow almost to the point of being flighty. The staff of Catco (including Kara) sycophantically acquiesce to her every whim for fear of being fired and black-balled from the industry. It is good in small doses, but like Spider-Man’s J Jonah Jameson, the character wears thin pretty quickly.

Of course, a woman who works her way to the top in her field HAS to be tough and cold, I suppose. That seems to be their message. Maybe I don’t agree with that; maybe that’s why I role my eyes when the character stomps out of the elevator onto her first scene of every episode. She has the power of an Oprah without the humanity. Cat Grant would never give away a fleet of cars.

Attempts to humanize her are forgotten or fall flat. Her interest in Kara being a foster child, for example. The one line (“that is not uninteresting.” – I paraphrase), brings the hope of a non-two-dimensional moment. Her adult son comes to National City and mother and child try to make amends. We get to see how she became the way she is through the visit of her unloving and shrewish mother.

It is quickly forgotten by the next episode.

When kidnapped by a supervillain, she begs for her life for the sake of her children. By this point I do not know if she is sincere or just buying time…

This is no slight on Calista Flockhart – she does a wonderful job with what she has. She looks like Holly Go Lightly but talks and acts like Maude.

But with Cat Grant, a little goes a long way.

Calista Flockhart will only have a few cameos in Season Two, which may or may not be a good thing – if they keep the character as is, small doses is best.

I think they really missed the boat on the relationship with fellow nerd Winn (played by Jeremy Jordan). He was in love with Kara before she became Supergirl.  He revealed his feelings but it was glossed over in a few episodes. Now they are back to being good friends. Too bad. That could have been explored more – he loved Kara before she donned the cape and big red S. Has his affection changed now that she is Supergirl? Does he still love Supergirl, or are his affections aimed at Kara only? He never said, “I wish we could go back to where we were. I wish I could talk to Kara when she’s not Supergirl.” I think they missed a good thing there.

Speaking of Jimmy: knowing Supergirl’s identity and being Superman’s Pal gives the character a worldliness that Brooks plays quite well. He half-smiles at Cat Grant’s – er – cattiness. If he could he would turn his back and wink at the camera; just like Superman did in the 1960s cartoons. Once you’ve faced down Brainiac, not much unnerves you…

So now that the show is under the CW umbrella, what can we expect?

It was established on the wonderfully fun Flash-Supergirl meeting in the episode “World’s Finest” that Supergirl and her show take place in another dimension. Whether that is thrown out to make all DC-CW shows one world remains to be seen. With Flash and Legends of Tomorrow constantly tinkering with alternate realities, it can easily be done.

The first season was on CBS which meant it tried to be all things to all people. Now it can focus on a narrower audience. The three other Berlanti Production shows have a total of seven seasons between them all. And the most common denominator is the epic season-long fight with a specific super-villain, culminating in a senses-shattering free-for-all at season’s end/sweeps. It has almost become a joke. From Quenton Lance in Arrow (I paraphrase): “Someone’s threatening to destroy Starling City? It must be May!”

Supergirl had an epic villain (Non), but it was not the main focus of the season. In fact in a few shows he seemed forgotten. But the season-long story arc will likely happen with Season Two. Because of the nature of the heroes and villains, it might be earth-shattering and not as vanilla as it seemed on CBS.

That may not be fair. We take Arrow’s villains seriously because the characters are human. Flash is the same, only a little less due to the character’s powers. There is no way to forget that Supergirl is fantasy and that creates a disconnect that doesn’t exist in the other shows. Ra’s al Ghul is thus a scarier villain than a White Martian (being a more well-rounded character played by a superb actor aside…).

That being said Flash, Arrow and Legends of Tomorrow did it correctly. Other things happened during the season, too. There was story progression; not one long episode with no progression and no enjoyment – where you could skips months of programs and not lose any of the plot (kaff-agentsofshield-kaff).

Season Two will introduce a character names Maggie Sawyer from the National City police department.  Will she be an ally or an antagonist like Joe West on Flash or Quenton Lance on Arrow?

The press is all over TV’s Wonder Woman Lynda Carter appearing as the US President. Will she have a regular role or just appear occasionally?

Another item the press is gaga over is Superman’s larger role in the next Season. In Season One he is shown only in vague visions. Good move. This is Kara’s show. He would only have up-staged her at this point. He does contact Kara by texting her (“Need help?” “Are you all right?”), which was another good move: the show didn’t ignore him, but he wasn’t a deux ex machina saving the day every other episode, either. Hopefully he won’t steal Season Two.

Also in Season Two we will meet Mon-El, a member of the Legion of Super Heroes who started off as another youngster sent to earth from another planet. Unfortunately, he had amnesia and could not remember where he came from. Having the same powers as Superboy, he assumed, using comic book logic, that this stranger was his brother! We will see how Supergirl treats the story.

Because of what they did with “For the Man Who Has Everything” though, I’m not worried. 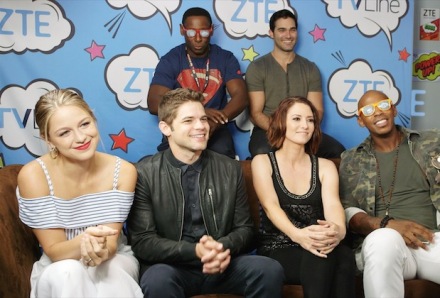 Up Next: the Flash

Characters mentioned and their images are copyright their respective holders.  Thanks to DC Comics, the CW Network and Berlanti Productions and the actors portrayed for the use of their images.

I also thank the original creators of all characters mentioned, whether or not they have been properly compensated (gratmens during the credits aside).