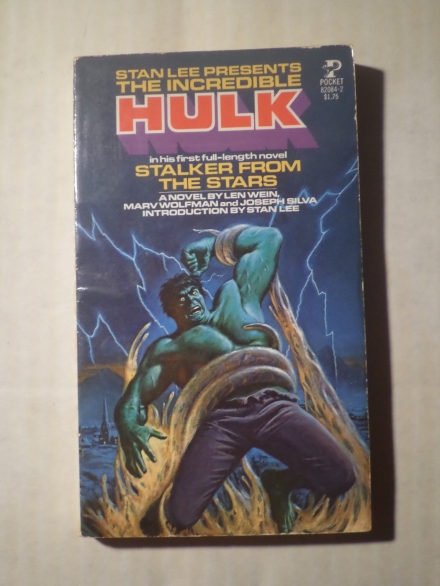 The Incredible Hulk: Stalker from the Stars by Len Wein with Marv Wolfman and Joseph Silva. Released January 1, 1978. Really? So says Amazon; if so this paperback was published before Spider-Man’s Mayhem in Manhattan, which has always been listed as #1. …

Len Wein is known for co-creating DC’s Swamp Thing and Marvel’s Wolverine and joining him with Nightcrawler, Storm and Colossus as the All-New X-Men. Marv Wolfman is known for his excellent run on Tomb of Dracula. Within a few years of this novel he would write for one of the best comics ever created – Night Force – and co-create the New Teen Titans.

No mention as to who does the interior art (pictures of the Hulk at the beginning of each chapter) – it is from various Marvel comics, house ads, etc. The internet says the cover is by Bob Larkin.

The book is 174 pages long, although the story begins at page 9.

For the first few pages there is a brief introduction by Stan Lee. He hypes the popularity of the Hulk TV show and explains the characters Rick Jones and Thunderbolt Ross. Both characters are integral to the comic book but neither of whom appear on the television show.

I never liked Thunderbolt Ross: in this novel, as in the comics, Ross is so two-dimensional he makes J Jonah Jameson look like Hamlet. A little goes a long way. WARNING: playing a drinking game where you take a shot every time Ross says “halfwit” may lead to alcohol poisoning.  It is to Thunderbolt Ross was “dolt” and “clod” were to (Tomb of) Dracula. It’s not so bad, but if the book is read in one sitting (and that is easy to do – in a good way, like a great old pulp magazine) its use is frequent.

Gratmens: Buscemas café and Leiber garage are place-names in the book, named for Sal Buscema who drew the Hulk for ten years (it could be for his brother John, who drew the Hulk for only a few issues, but my money is on Sal) and Larry Leiber, Stan Lee’s younger brother who at that time was penciling the Hulk newspaper strip.

The origin of how Bruce Banner became the Hulk is given its own chapter early in the novel. Compare that to the two-page origin of Book #1 starring Spider-Man. This makes some sense – Hulk’s origins are less-known to the general public and varied greatly from the Bill Bixby/Lou Ferrigno-starring television show.

Rick Jones wanders into the town of Crater Falls looking for Dr. Rudolph Stein, a contemporary of Bruce Banner who is also known for his research into gamma radiation.  Rick learns Dr. Stein is missing – he wanders the woods and finds the crater from which the town founded its name.

While searching the woods Rick finds a murder victim bathed in green gamma radiation (the identity of the body is a SPOILER and won’t be revealed here). He calls the local sheriff but the body disappears before anyone else can see it.

Also, at night the entire citizenship of Crater Falls walk zombie-like from the town into the woods. Rick’s attempts to find out what is going on is rewarded with a thump on the head (at first) and then by his disappearing – just like Dr. Stein!

Meanwhile, Bruce Banner is hunted by General Thunderbolt Ross – who finally manages to capture the Hulk!

Banner escapes Gamma Base when he hears of Rick’s troubles. Rick’s phone went dead during a conversation with Ross and Rick has not been seen nor heard since. Banner goes to Crater Falls, meets the same citizens Rick did, learns of Stein’s disappearance and investigates.

As the title suggests, our green goliath comes in contact with an alien menace that can control the minds of puny humans.

The Hulk and his friends must find a way to stop the evil alien Sh-mballah while also fighting off the hypnotized citizens of Crater Falls!

By the time this paperback came out the Incredible Hulk TV show was in full vigor. The book was an obvious attempt to cash in on the success of the show. That’s not a criticism.

The story leans more toward the comic books – the regular comic book cast is present and the Hulk fights off super baddies with onomatopoetic names (“Whence Comes Vrloom!”).  It’s no spoiler to say Hulk fights off a Cthulhu-esque alien.

And by the way, an alien buried beneath a small town who mentally manipulates the citizenry pre-dates Stephen King’s Tommyknockers by nine years. To be fair, though, that science fiction trope has been around for decades.

Should I ever meet Len Wein or Marv Wolfman I would ask them about how they collaborated – did they each do a different section (“You do Rick Jones and Crater Falls and I’ll do the Hulk/Gamma Base stuff”) or did they Lennon-McCartney with their typewriters back-to-back telling each other their ideas?

A great read – very comic booky. Even moreso than the previous Spider-Man novel which was in itself an excellent read. A comic book in prose, which is the whole idea of the series, isn’t it? This story even has sound effects!  Chuff! Karash! Kaslam!

Characters mentioned are copyright their respective holders. Thanks to Marvel Comics and Pocket Books for the use of their images. Cover image was taken by the author.

I also thank the original creators of all characters mentioned, whether or not they have been properly compensated or credited.