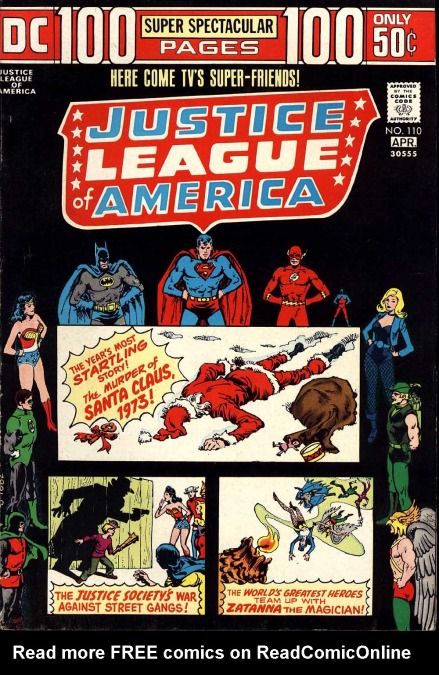 “The Man Who Murdered Santa Claus!”

The Key returns and engineers the murder of the Santa Claus scheduled to appear at an orphans’ Christmas Party with Superman and Batman, thus issuing a challenge to the Justice League. John Stewart, Hal Jordan’s official substitute, stands in for a temporarily incapacitated Green Lantern, as the JLA heroes enter a death-trap, a dilapidated building in a St. Louis ghetto. One by one, the members sacrifice them-selves in a gauntlet of traps, so that the others can go on to defeat their foe, first Superman, then Black Canary, Batman, and Green Arrow. Red Tornado and John Stewart also seem to perish, but actually all the members are saved by the intervention of the Phantom Stranger. The Key, having learned that he has only a short time to live, and having vowed to destroy the JLA before he dies, now escapes, and the heroes must evacuate an entire city block, which the villain’s devices are set to destroy. The substitute Green Lantern immediately recreates the old ghetto buildings, repairing them in the process. Later, Red Tornado is presented with his Christmas gift — a new and more colorful costume.

Any JLA story that takes place in my hometown in a good one!

One thought on “A Bronze Age Christmas: Justice League #110”