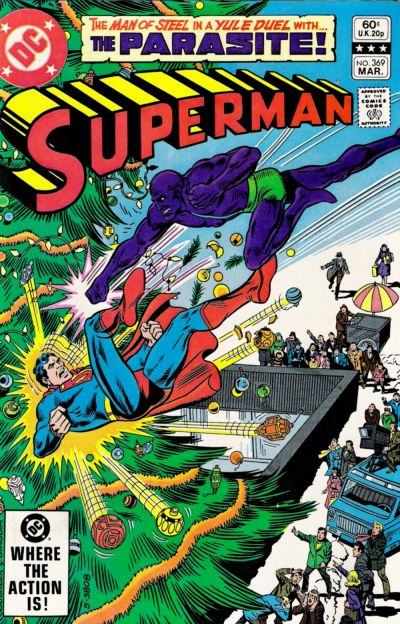 After Superman saves a family and their home from a sinkhole, he delivers and trims a pine tree to the Metropolis Galaxy Christmas Tree Celebration.

Meanwhile, secret agent Cory Renwald (who was the Kent’s foster child before they adopted Clark) gets his orders for the holidays: to shadow a TV personality who is suspected of treasonous acts against the country: Clark Kent!

While relaxing in his Fortress of Solitude, Superman holds a pity party reminiscing about his parents and Smallville. He is attacked by the Parasite! Even after absorbing some of Superman’s power, Parasite cannot prevent the Man of Steel from hurling him 17 miles away.

Parasite is pleased – he has enough power to last him a few more days and his mental absorption of Superman’s state-of-mind gives him an idea to finally defeat the Kryptonian.

A hitman’s attempt at Clark Kent’s life (for exposing Metropolis’ mob) is thwarted by Renwald to Clark’s astonishment! Renwald gets more details of his assignment. Kent is betraying the US not to an enemy country – but to aliens from space! Renwald breaks into Kent’s apartment and triggers an alert.

Before Clark Kent can change into Superman and confront Renwald, the Parasite attacks again!

We learn that Renwald’s superior in his new assignment is really the Parasite in disguise. Sure enough, Renwald discovers the alien trophies in Clark’s apartment.

Parasite reveals his plan: with him attacking Superman, and Renwald investigating Clark Kent, and Superman’s blues over the holidays, the Man of Steel is physically and emotionally ripe for defeat!

Renwald and Parasite (disguised as his boss) meet; and Renwald and Superman expose Parasite’s ploy! During the battle, Parasite passes out after Superman reveals he injected himself with low-grade Kryptonite, paralyzing the Parasite more and more every time he absorbed Superman’s powers (through Parasite would say Superman was still weakened from their previous battles, when it was really his Kryptonite injections).

Renwald confronts Clark about the alien trophies. He assumes Clark is keeping the trophies on Superman’s behalf. Clark is no traitor, and the two “brothers” enjoy Christmas reminiscing about Jonathan and Martha.