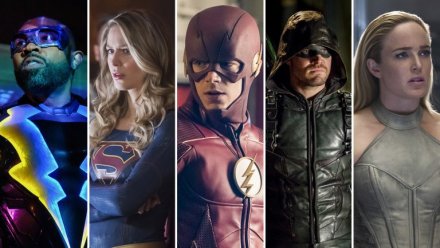 Read the original story here: https://www.hollywoodreporter.com/live-feed/black-lightning-arrow-flash-supergirl-legends-tomorrow-castings-news-comic-con-2018-1127968
— Written by Sydney Bucksbaum (@SydneyBucksbaum), thanks for allowing me to share your story!

The season five big bad is revealed, and it’s not another speedster!

Veteran actor Chris Klein (American Pie, Oz) joins The Flash as season five’s main villain, DC Comics character Cicada. A grizzled, blue-collar everyman whose family has been torn apart by metahumans, Cicada now seeks to exterminate the epidemic — one metahuman at a time. While Cicada in the comics is a cult leader, executive producer Todd Helbing explains that they’re taking some liberties and putting the iconic character through The Flash lens. “He’s not so much a cult leader, but his powers present a challenge for Team Flash that they’ve never had to deal with before,” Helbing says. Other villains coming up this season are “younger” versions of The Rogues, according to Helbing. And the showrunner hopes to do a team-up between King Shark and Gorilla Grodd in the second half of season five … but only if they have enough money in the budget to do all the CGI work. This is something he’s been trying to do for years, but never had enough money.
Before the San Diego Comic Con panel began, a sizzle reel played for Ballroom 20 with new footage from season five, including some answers about Nora West-Allen (Jessica Parker Kennedy). Her superhero nickname in the future (given to her by her father!) is XS, and she’s hiding something from Barry (Grant Gustin) and Iris (Candice Patton) at first. And while Lonsdale isn’t returning to Legends of Tomorrow this season, he is shown in The Flash season 5 trailer, fully suited up as Kid Flash and running alongside The Flash. But the biggest cheer came when Barry got a new suit upgrade: his Flash ring from the comics. Expect to see a new supersuit as well, one that Helbing promises is “the most comic book-influenced” look yet.
But fans should begin bracing themselves now. Helbing warns, “There will be a lot of deaths this year.” Maybe even a main character or two.

About the blogger: Michael Curry is the author of the Brave & Bold: From Silent Knight to Dark Knight, The Day John F Kennedy Met the Beatles and the award-winning Abby’s Road, the Long and Winding Road to Adoption and How Facebook, Aquaman and Theodore Roosevelt Helped. Check his website for more releases! Thanks for reading!