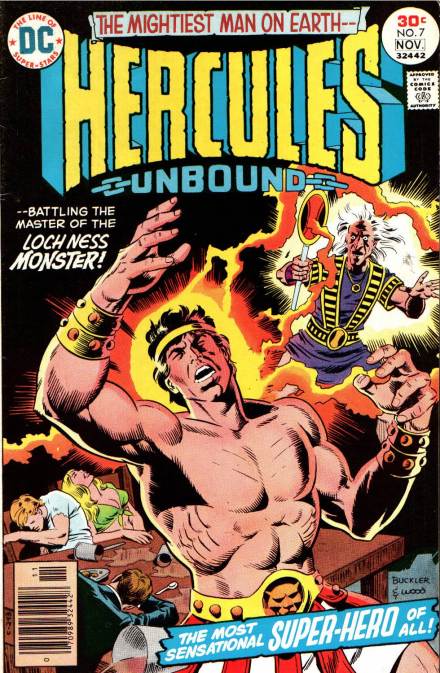 “To Slay a Legend”

At the shores of Loch Ness, Hercules and friends are greeted by three beautiful women who invite them for a dinner and a peaceful repast. Naturally, Hercules is suspicious, but relents when the others see nothing wrong here.

Surprise! The parties are drugged into unconsciousness! When they awake, they are bound and Kevin is staked at the shores of the loch. The villain is revealed: Casper Zedd – given magical powers by a Cthulhu-esque insectoid who appeared at Loch Ness days after WWIII began.

Zedd was ordered to capture Kevin and imbue the new and weakened god-thing with Kevin’s more-than-mortal power!

Hercules recognizes the god-thingie as Oceanus the Titan! Hercules … unbinds and attacks Zedd, knocking him out and stopping Oceanus’ recharge.

Per Hercules, only Zeus’ lightning can destroy Oceanus. Our heroes decide to use the nearby hydroelectric dam to generate a large enough charge to destroy Oceanus – who felt the destructive power of WWIII and came to investigate the end of the world, but became too weak in transit.

Oceanus attacks the heroes at the dam, and is joined in battle once again with Hercules. Hercules wields the electrical bolts of “lightning” and knocks Oceanus back to his nether realm.

Zedd’s scepter explodes when Oceanus disappears and his followers leave him. He is now as he was before the war – alone.

The letter column “Myth Mail” thanks legendary writer David Micheline and legendary artist Walt Simonson for this “fill-in” issue. Gerry Conway, we are told, is gone forever, and Jose Luis Garcia-Lopez will be back next issue.

Simonson’s art is also hidden by Wood’s dominating pencils and/or inks, but it still makes for a dazzling combination!

And thank you, David, oh thank you for NOT having Nessie pop up anywhere in the story. Oceanus the Titan was enough of a Loch Ness Monster for all of us!