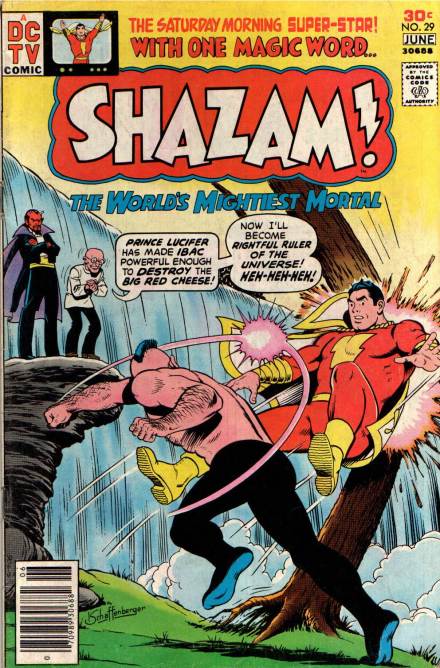 Sivana kidnaps Stanley Printwhistle to convince him to help defeat Captain Marvel. Prince Lucifer appears (the one who gave Printwhistle his powers) and vows to make him stronger. Stanley says his magic word: “Ibac” (Ivan the Terrible, Borgia, Attila, Caligula) and turns into Ibac the Cursed! Sivana also brings in arch-criminal Aunt Minerva and instructs her and Ibac to distract Captain Marvel while he is busy blowing up Niagara Falls.

But Cap is busy doing charity work! So, when Ibac starts crushing cars and destroying lampposts, it is up to Uncle (Dudley) Marvel to stop him! Ibac runs from Uncle Marvel – well, it was actually from Minerva who rounded a corner and also gave chase…

… all the way to Niagara Falls! Ibac hides from Minerva in a barrel – which Sivana was to used for his bomb. Ibac begs Dudley for help and they both seek advice from Solomon.

Captain Marvel finds Dudley and Ibac. Thinking Dudley needs rescuing, he fights Ibac. Minerva finds them all, and Ibac reverts back to Printwhistle to stop Minerva’s advances (she’s not THAT desperate for a husband!). Cap catches Minerva and Sivana (who vows to escape and battle Marvel in Pittsburgh) and Printwhistle vows never to turn into Ibac again – to avoid Minerva’s romantic advances!

So far so good – the letters are positive for Cap’s new direction! The return of great Captain Marvel villains continues: This is Aunt Minerva’s first Bronze Age appearance (Shazam #12 was a reprint) and Ibac’s fourth!