FROM THE WORLD OF A MILLION YEARS AGO: TOR

Tor the comic book character has an interesting sixty-year history: Tor is a caveman from one millions years ago…

Wait, there weren’t any humans (as is currently defined) a million years ago. Certainly not light-skinned, brown-haired cavemen like Tor. There were homo-erectus (snicker) and homo-mauritanicus, but not humans.

Well, anyway, Tor the caveman from one million years ago fought other cavemen, dinosaurs… 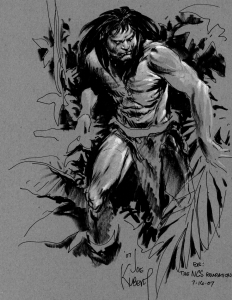 Tor the character debuted in the comic 1,000,000 Years Ago #1 by St. John Press in 1953. Issue #2 was renamed 3D Comics (renaming comics and continuing the numbering was pretty common until the late 1960s and happened even in the 1970s with Our Army at War turning into Sgt. Rock to name one – something to do with saving postage…) and then for issues three through five the series was remaned Tor. It lasted until October 1954.

But they did. Tor, a non-DC character, whose creator had control over his appearances and content, was given his own DC Comic in 1975. Perhaps it had something to do with that particular owner.

If Joe Kubert drew newspaper comic strips in the 1920s and 1930s, his name would be mentioned in the same breath as Alex Raymond and Hal Foster.  War comic fans would argue Kubert’s best work was with Sgt. Rock and DC’s other war heroes.  Superhero fans would argue Kubert’s best work was with Hawkman.  Kubert became a legend in both these genres and also what would now be called “sword and sorcery” with Viking Prince in Brave & Bold.  His penciling would probably have even worked with Archie and Casper the Friendly Ghost!

Kubert’s art is very stylized and yet very accessible.  His characters were realistically lean and muscular.  His women were curvy and beautiful.  When a character looked weary, his shoulders sagged and his arms hung limp at this side.  His action scenes were straight out of “Flash Gordon” and “Tarzan”.   When he had his few off-moments, he had the rushed and sketchy style for which he is the most criticized. 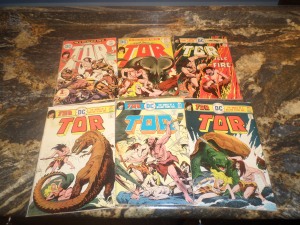 The covers of Tor (1975) were great examples of Kubert in all their glory – although I noticed something … of the six issues – three had Tor rescuing a pretty blond. One had Tor fighting ape-men ala Tarzan, in another he rescued a baby from an erupting volcano and another he saved a tribesman with a pretty blond in the background. Four out of six with pretty blondes…

Every issue reminds us of this dark and dangerous world – where death can come at you from every angle – be careful while walking in water or around rocky corners. Kubert does a superb job keeping up this moody paranoia!

Later issues describes Tor as a man dedicated to justice and fairness and how rare that trait is among the first men – who are usually too busy just trying to survive!

Every story was a reprint. Kubert contributed some new pages as bookends or story tags – usually drawings of the artist himself describing Tor and his environs above a splash page of Tor doing something cavemanish.

“The World of a Million Years Ago” appears as a tagline on every issue. The word “From” was added at the front of that tag only in issue #1.

#1. June 1975, “The Beating”, Joe Kubert (w/a/e/cover), Carmine Infantino (i) (the strip reprint), Allan Asherman (asst. ed.); as a youth, Tor lives in a fishing village. He wanders into the mountain people’s  territory and is beaten by Kobar. Tor is later chased by an alligator-like phytosaur. Kobar, who considers Tor his slave, tries to protect his property by slaying the beast but nearly drowns. Tor rescues him. Their score is settled. Tor learns you can conquer an enemy by helping as well as hurting. The story is bookended by the adult Tor remembering this adventure while hunting food for his village (presumably written and drawn for this comic).

Kubert and Carmine Infantino (who inked) pushed a Tor comic strip in 1959 unsuccessfully. It was published in a fan magazine (Alter Ego) in 1968 and here in Tor (1975) #1. When DC’s Tor was released, Infantino was the publisher of the company.  This may explain why DC decided to publish a comic character whose bulk of profit, if any, would go to its creator. “Hey, Boss, can we publish my old Tor stories?” “No.” “I want to reprint that old strip you helped ink, too.” “Yes.”

Text page: Dinosaurs for Reel (a piece on stop-motion dinosaur movies through the years).

Another text page describes the origins of the Tor character and his world.

“Danny’s Dreams”, young Danny Wakely (get it?) is with his fellow students at the municipal museum’s dinosaur exhibit. Danny feels himself going back in time to the days of the caveman! He is chased by Cro-Magnons, attacked by a bear and a saber tooth tiger! The two beasts battle each other over this blond-haired, freckled meal. Danny escapes by inventing the wheel (tying together round rocks) and two-wheels his way to safety. He wakes back up to find the mummified remains of the bear and saber tooth – each died of their wounds – and a strange two-wheeled vehicle found nearby. Did Danny dream this or did he REALLY go back in time…?

Both stories are reprints from One Million Years Ago #1 (1953)

Writer Don Glut (I assume that is THE Don Glut) had a letter published, thanking Joe Kubert for his original run of Tor and instilling in him a love of dinosaurs that encouraged his writing.

#3. October 1975. “Isle of Fire” (one of only two of the series in which the cover related to the story inside); Tor travels to a volcanic isle ruled by giant hairless red-skinned “fire-men”. Tor rescues their human slaves and kills the Fire-Men leader just as the volcano erupts and sinks the island. Reprinted from Tor (1953) #3.

“Danny’s Dreams” – Danny, as a caveman, and his tribesman’s raft (presumably not the raft Tor used in the prior story) sink in a storm. Danny lands on an isle of pygmies who are sensitive to loud noises. He helps them defeat a “giant” (normal-sized) man that is terrorizing their tribe. Reprinted from Tor (1953) #5.

Uber-fan Richard Morrisey has a letter published – his second in the Adventure Line.

#4. December 1975. “Black Valley”; a tribe routinely sacrifices their infant/toddler girls to the “gods” of the Black Valley. Tor discovers the gods are amazon women. Can Tor make peace between the tribes and the amazons? Can he rescue the latest sacrifice from a hungry saber tooth? This story has a GREAT two-page splash! Pretty rare for the early 1950s… Reprinted from Tor (1953) #3.

“Killer Man” is a crippled tribesman who kills beasts for sport. The beasts are slaughtering the Rock People tribe in retaliation! (Letter writers complain about the lack of realism at featuring dinosaurs and men together – imagine their reaction to vengeful mammals!) The Rock People ask Tor to stop the Killer Man. Reprinted from 3D Comics (1953) #2.

Feature: The Caveman’s Escape by Allan Asherman. A text piece with photo stills from the movie “When Dinosaurs Ruled the Earth”.

“Danny’s Dreams”; clubs can’t kill a bison, so Danny creates a bow and arrow that helps slay the beast – now the tribe has meat! He draws the bow and arrow on a cave wall to show the tribesmen how to make one. Danny awakes at a museum and sees his own drawings as an exhibit!

#6. April 1976, for only the second time out of six – a story from inside the comic makes the cover. The stories in this issue are not titled. I’ve lettered them for convenience’s sake.

A.  Captured by Crater People (subterranean Neanderthals), Tor is sacrificed to the Killer Beast (a T-Rex). Even after beating the Beast, he is forbidden to leave! When he is the only one who helps the chieftain after he is attacked by a giant serpent, he is released because of his bravery. Reprinted from 3D Comics (1953) #2.

B.  Tor watches a triceratops battle a stegosaurus – the winner gets to drink from the water pond. The loser? Tor’s tribes’ meal! Um, what tribe? I thought he was banished… Reprinted from 3D Comics (1953) #2.

C.  Man (Tor) and beast flee from a massive forest fire. The only safe place? An island! But while there a turtle the size of a tank attacks Tor! Reprinted from 3D Comics (1953) #2.

Tor was the last of the “failed” titles in the non-imprint Adventure Line. Beowulf lasted six issues, too, and its last issue was on the stands the month before. Warlord #2 was published the same month as Tor #6 – April 1976. This meant it was published around January 1976.

Tor was an oddity among the other Adventure Line brethren – it was a reprint series publishing a rare comic that few readers had ever seen.  Joe Kubert linked the book in the letter columns with Tarzan and Korak. Books he published with DC always had an automatic audience. But it didn’t last. Korak would also fold within the year. What would happen in a few issues when the reprints ran out? Would Kubert have done new stories? Did he reprint what was available and voluntarily folded the comic? Perhaps. If he wanted to do new stories, he could have – and used the older reprints as back-ups.

DC reprinted these stories (and presumably the rest of the 1953 run) in trade paperback and even hardback over the years. In 1993 new stories by Kubert were published by Marvel (of all people) under their Epic imprint.

The two paragraphs describing Joe Kubert’s art is from my free ebook Brave and Bold: From Silent Knight to Dark Knight, available at Smashwords, Kobo, and through Barnes and Noble here: http://www.barnesandnoble.com/w/the-brave-and-the-bold-michael-curry/1120872264?ean=2940046443011