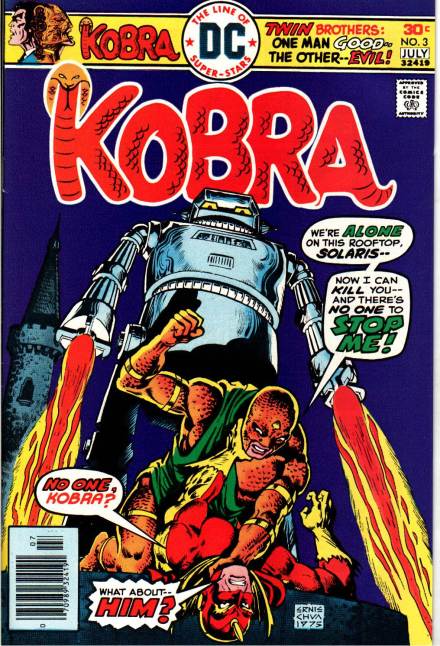 Synopsis: Kobra and Jason Burr plummet to their deaths after the cliffhanger of the previous issue. Perez throws a line to save Jason. Burr grabs the line and watches as his twin plummets to earth. He braces for death, due to the empathic symbio-link between the twins: one feels what the other feels, even, presumably the sweet kiss of death.

But … Jason lives! And is convinced that Kobra is dead!

Until Kobra breaks into Jason’s apartment and enlists his aid in defeating Solaris. Jason agrees, and while he changes into his Gemini suit, Kobra and Melissa share an emotional and mysterious moment (that Jason also feels). Apparently, Melissa and Kobra had a relationship some two years before… 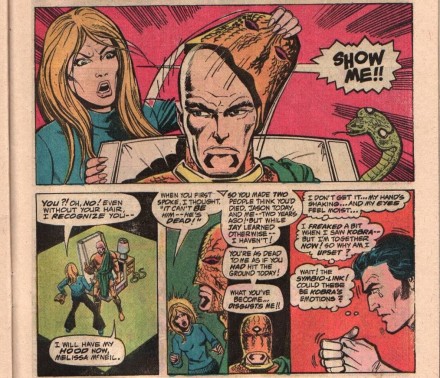 While invading Solaris’ stronghold, Kobra tells Jason about Natalie, his former love: they met while both were convalescing in a hospital. Kobra quit his Cult to travel with Natalie, who is shot dead by Interpol agents in Picadilly. Seems she was a murderess and jewel thief. He later says he returned to the cult to conquer them and mold them into international terrorists bent on destroying the law enforcers who killed Natalie.

Meanwhile, Kobra stops Solaris’ mechanical guard as Jason negotiates a laser trap by communicating telepathically with his twin who controls Jason’s movements through the maze (we never see the twins use this trick again in the series).

Kobra and Jason attack Solaris and his men. Jason realizes Kobra not only wants to stop Solaris, but also to snag the Heliotron for his own! In the midst of the battle between the brothers Perez blasts his way in with his fellow CIA agents. CIA? Yes, Kobra reveals that Perez is really CIA and trying to get back canisters of cobra venom (stolen by Kobra) – venom that should have been destroyed six years ago!

A nice way to conclude the magazine – the letters page says this is likely the last issue, despite the blurb describing issue four on the last panel.

This July 1976 DC comic was not part of the “DC Salutes the Bicentennial” collection of issues in which one collected the cigar band upper covers to get a coveted Superman belt buckle. But it was in good company – issues of Flash and Wonder Woman weren’t part of the promotion either.

Look at the people involved in this issue – they should all be part of a comic book hall of fame: Giordano? Terry Austin? Keith Giffen? Martin Pasko? Yeesh! For a C-list comic this has a lot of talent! Granted all but Giordano are early in their comic book careers, but STILL …

Pasko does a fine job showing us Solaris’ insanity. He is almost child-like and we almost pity his demise at Kobra’s hands. 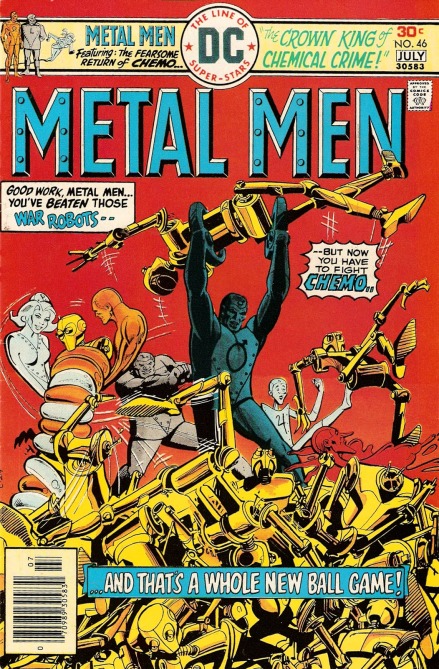 The rebuilt Metal Men try to find Doc Magnus’ cash store received when Magnus blackmailed the world in his evil phase, but the hiding place was empty. Magnus eventually joins the search and finds a chemical trail leading away from the hiding place. The trail leads to the home of the two keepers of the vault who once worked for Magnus and the vault’s guard – Chemo!

Meanwhile, in Washington DC, someone claiming to be Doc Magnus destroys a mugger …

The Metal Men attach Chemo! They drill through his ankle to drain the monster of his chemical innerds and then smash his glass exterior. Gold, Lead and Mercury give their artificial lives to achieve their victory.

There are still a few loose ends to clean up in the Metal Men’s strange late-silver-age continuity. Gerry mops it up while re-introducing one of the MM’s popular villains. Add that it is defeated simply by draining it and smashing its glass container. Except for the environmental disaster that would result, it seems a pretty simple way to get rid of it!

Metal Men was probably not the best-selling comic in DC’s stable. Would it not have benefitted a little by being one of the “DC Salutes the Bicentennial” comics – in which one stripped off the special cigar-band logo to win a precious Superman belt buckle?  Well, it couldn’t have hurt anyway …

Once again the art and story fit perfectly with the mood of the book. The Metal Men are still finding their way in this revived continuity – they are no longer hunted and Doc is on their side, a complete reversal from prior issues. And their personalities are coming back: Lead is slow, Mercury is argumentative, Gold is the leader and Iron his (near) invincible back-up. Tin is meek and Platinum is hot.  The fun of the comic continues! 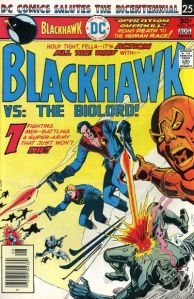 This paragraph is a repeat of my blog on Freedom Fighters #3. Quality Comics was a successful comic book company during the medium’s golden age. It introduced Kid Eternity, the Blackhawks, the much-lauded Spirit and Plastic Man to comics. The company closed shop in the mid-1950s and the catalogue of characters was bought by DC/National. They continued only four of Quality’s titles: GI Combat, Plastic Man (although DC would not publish a Plastic Man comic until the 1960s), Blackhawk, and Heart Throbs – all but the latter were still being published by the time of the Bicentennial (Plastic Man would get much more popular in the coming decades).

Blackhawk debuted in Military Comics #1, August 1941 as ace pilots fighting the Nazi menace. Note this was before the US involvement in WWII. The group was given its own comic published in Winter 1944 beginning with issue #9 (retitled from Uncle Sam Quarterly – this was commonly done even as late as the 1970s to avoid postal fees and registrations, etc.). They still starred in Military Comics (renamed Modern Comics) until it was cancelled with issue #102 (October 1950).

At one point the Blackhawks outsold every other comic book character other than Superman.

DC Comics continued the series when it bought Quality and continued publishing the comic until 1968, canceling it after issue #243. During the mid-1960s the Blackhawks became costumed superheroes rather than ace pilots.

The title was brought back with #244 in January 1976. Although still ace pilots, the series was set in modern times fighting modern menaces. This run ended with #250 (January 1977) and was successfully revived in later years (picking up with the original numbering) and also appearing in the anthology Action Comics Weekly in the 1980s.

I think this synopsis will take longer to read then the comic itself, as is usually with the masterful David Anthony Kraft, his comics are chock-full of plot and details!

While debriefing their workout in their private training course, the Blackhawks are interrupted by the Duchess Ramona Fatale, also called Patch. She introduces her own team of lady commandoes and asks the Blackhawks to help her raid the HQ of Anton Vibrax – who murdered Patch’s troops in issue #244. Blackhawk allows only Andre to go with them, as he has worked with Patch’s commandos before. 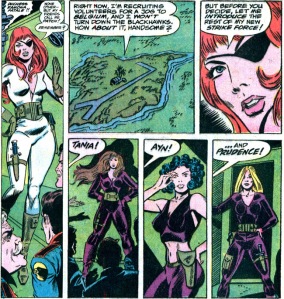 Meanwhile, Blackhawk receives a message from their CIA contact asking them to escort a secret cargo from Greenland to Great Britain. They agree and take off – except for Hendrickson, who stays behind with his daughter, as he is getting too old for such adventures.

The CIA contact reveals himself to be the villain Bio-Lord. The Blackhawks are flying into a trap! 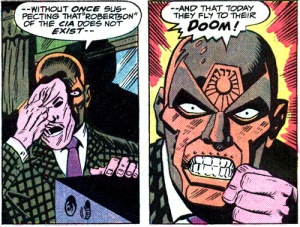 And indeed cyborgs blast two of the Blackhawks out of the sky (Olaf and Blackhawk himself) and capture the others mid-air. Blackhawk and Olaf are eventually also overcome and captured.

Andre and Patch’s commandoes invade the headquarters of Vibrax’s master. Andre chastises the women warriors for using real bullets to kill instead of subdue. They find the HQ empty – it was a decoy. Andre again chastises them for taking lives for nothing!

Andre learns of the other Blackhawk’s fate from Hendrickson and heads to Greenland. Hendrickson’s turns around to find his daughter, Elsa, pointing a gun at him and threatening his life!

The Biolord explains to Blackhawk his evil scheme: he will detonate an anti-matter bomb and decimate Great Britain as part of his plot to destroy the human virus. Blackhawk breaks his bonds and rescues his troops, but not before the Anti-bomb is launched!

I started collecting Blackhawk with the next issue until its cancellation with #250. 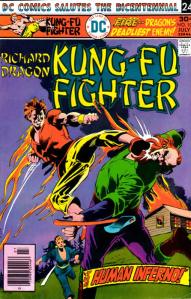 During the early to mid-1970s everybody was kung-fu fighting. The craze was fast as lightning. Both DC and Marvel jumped on the bandwagon – Marvel with its excellent Hands of Shang Chi, Master of Kung-Fu (which actually began as Marvel Special Edition #15 from December 1973) and its various spin-offs (Giant Size …) and magazines; and Iron Fist, martial arts set firmly in the superhero mode.

Although a little slow to catch on to the craze, DC Comics jumped in with Richard Dragon, Kung-Fu Fighter. The character debuted in the 1974 novel “Dragon’s Fists” by Denny O’Neal and Jim Berry. 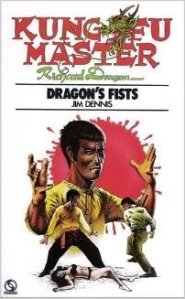 They adapted the character into the comic book. The first issue was dated May 1975. Richard Dragon was a thief caught burglarizing a dojo. Its sensei trained him to use his talents for good. Literally, GOOD (the Global Organization of Organized Defense).  Good group, bad anagram.

The comic ran for 18 issues through December 1977 and for a time was published monthly. In 1976 DC continued the craze with Karate Kid – martial arts set firmly in the superhero mode. Karate Kid’s Bicentennial issue (#3) has already been reviewed…

By the time Richard Dragon, Kung-Fu Fighter ended, so had the Kung Fu craze. Good thing, too, I suppose: it was a little bit frightening…

The letter column admits this is a fill-in issue. This is one of the four Bicentennial issues I owned when they were new on the stands.

Ben Turner (who would eventually become the Bronze Tiger) inherits a thousand acres of timber land. The lumberjack foreman is a murderous brute named Hatchett and vows to kill this new owner, as he did the previous owners, lest he cut into the lumberjack’s vast profits! 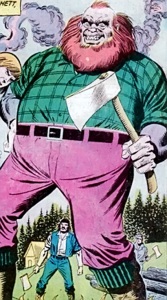 Richard, Ben and Lady Shiva travel to the property and are promptly attacked by lumberjacks. Dispatching them, Ben meets his namesake nephew, who has been in hiding since Hatchett murdered his parents.

Again attacked that night in their hotel, the quartet go to Hatchett for the final face-off. Our heroes make it to a log cabin which is set ablaze by the loggers. Ben, Benjamin and Shiva go through the front door to face a chainsaw-wielding maniac while Richard, badly burned, battles Hatchett.

The Dojo: letters answered (presumably) by Assistant Editors Jack C. Harris and Bob Rozakis. Letters by Bart Casey of Dayton, Ohio (very positive), Jim Humm of El Monte, CA (asking if Richard Dragon exists on the same earth as Superman and Batman – yes) and Judy Newton of Thompkinsville, RI (praising Shiva as a more liberated woman than Wonder Woman). Texts introduce us to Jack Abel and tells us that this is Denny O’Neil’s last issue as editor – Gerry Conway will be handling the editorial chores (at least for the next issue) and the writing will be taken over by David Anthony Kraft.

Join me next time for DC’s Bicentennial issue #25: Blackhawk #247