Three of the most famous – and funny – comedians of the 20th Century were George Burns, Jack Benny and Bob Hope. They and their wives adopted all their children.

George Burns (born Nathan Birnbaum; January 20, 1896 – March 9, 1996) was an American comedian, actor, singer, and writer. He was one of the few entertainers whose career successfully spanned vaudeville, radio, film and television. His arched eyebrow and cigar-smoke punctuation became familiar trademarks for over three-quarters of a century. He and his wife, Gracie Allen, appeared on radio, television, and film as the comedy duo Burns and Allen.

When Burns was 79, he had a sudden career revival as an amiable, beloved and unusually active comedy elder statesman in the 1975 film The Sunshine Boys, for which he won the Academy Award for Best Supporting Actor. Burns, who became a centenarian in 1996, continued to work just weeks before his death of a cardiac arrest at his home in Beverly Hills.

His popularity never faded – because of his caustic, timely and timeless wit. 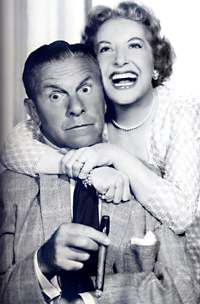 No bio of comedian George Burns would be complete without a brief word or two of his partner Gracie Allen (July 26, 1895 – August 27, 1964).  George Burns said he asked Gracie “How is your brother?” and it gave them a 20-year career. She burned the Thanksgiving turkey because the instructions said to cook twenty minutes per pound and she weighed 120 and …

Ronnie Burns was five weeks old when he was adopted in Chicago on September 27, 1935.  George Burns said he was the sickliest baby up for adoption from the agency, and Gracie chose him because she thought he needed their help (per Burn’s excellent book Gracie: A Love Story). He died November 14, 2007.