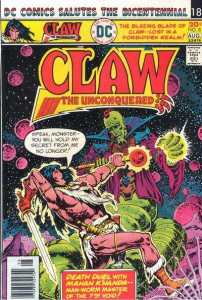 Claw was part of DC’s Adventure Line of comics from 1975. The implication that “Adventure Line” was some sort of imprint is my own invention and I have published many a blog on that line of comics. Claw’s is here:

A house ad in 1975 hyped seven comics as part of DC’s new Adventure line of comics – as opposed to their superhero and horror line. Claw the Unconquered, Tor, Kong the Untamed, Warlord, Beowulf Dragon Slayer, Justice Inc. and Stalker were advertised. Of the comics, only Warlord eventually met with success – going well past a hundred issues into the 1980s. But Warlord was put on hiatus after its second issue for several months. It quickly succeeded upon its return, but during August of 1976, only Claw survived: in that respect, it was the most successful of the “Line” and at that point it lasted longer than the other six.

For its first seven issues, legendary artist Ernie Chua (Chan) did the excellent artwork. With this issue, a new art team debuted. And they did an excellent job, too – good thing, they had some huge shoes to fill. With the new art I noticed was Claw looked more like a Native American than a certain Cimmerian he previously resembled. The artwork certainly fit this excursion into weird worlds. In the letter column, writer Michelinie calls the Villagran/Novelle/Dominguez combination of artists contributing to this issue “the South American Crusty Bunkers” (a name given to a core of artists who occasionally helped out Neal Adams and Dick Giordano at deadline time…).

It is a beautiful cover – Claw in all his faux-Cimmerian glory about to slice a trans-dimensional worm-man in twain, all while spouting neo-Shakespearean pomposity!  Even the issue’s villain’s name evokes Howard and Lovecraft – lots of oddly-placed consonants and apostrophes without a vowel in sight!

This issue is Part Four of Five. This background is a recap from issue #6 near the beginning of this epic quest: N’Hglthss (geshundheit) is “unleashed upon an unwary world … N’Hglthss, whose vile passage brings naught but death and decay … yet who cannot himself be touched by death … it had taken Avistar, the Burning Man, to reveal the only weapon effective against N’Hglthss :a silver sword called Moonthorn, whose origins lie buried deep in Claw’s unknown past … a blade attainable only by uniting the three facets of an arcane talisman known as the Grimstone …”. Issues #4 introduces the menace of N’Hglthss (geshundheit), #5-7 depict Claw collecting the talismans (talismen?) in excellent stories. In #7 Claw links the three talismans together and he and his companion disappear into the void! And on to…

“Master of the Seventh Void”, David Michelinie ( w ), Keith Griffin, Ricardo Villagran and Oscar Novelle & Luis Dominguez (Luis is mentioned in the letter column, but not in the splash-page’s credits) (a), Liz Berube (i).

Claw and his companion, Ghilkyn – a devil-horned extra-dimensional traveler – enter the seventh void. By page two Ghilkyn is thrust back to … well, who knows where, leaving Claw on his own.

Tell you what; let me use the author’s own synopsis from #9. I’m lazy that way: “traversing that demonic plane alone, Claw had come upon the object of his worlds-spanning search – the enchanted silver0hued blade called Moonthorn. But Moonthorn had a guardian – the malevolent politician-cum-sorcerer (snicker) Mahan K’Handa … a creature whose corrupt soul lay captive in a crystal egg about his waist … a vulnerability Claw’s twisted right have had somehow sensed and had crushed into oblivion allowing the elusive prize to fall into Claw’s grasp and allowed the Grimstone quest to at last end in success.” I will give my collection of Claw comics to the first reader who successfully diagrams that sentence. Now it is on to defeat the evil N’Hglthss (geshundheit)!

The readers are promised Claw’s origin next issue!

Of Swordsmen and Sorcerers (letter column); neither of the positive letters are about a specific issue, just praising the series in general. Paul Emrath of Milwaukee, WI and Kevin Callihan of Brea, CA contribute.

Claw had one more issue to go before cancellation. DC was about to launch their DC/TV line-up (Shazam, Isis, Welcome Back Kotter and Superfriends), so something had to go to make room. One of those somethings was Claw.  The yearning lust of DC fanboys to get the Bicentennial Superman belt buckle was not enough to keep the title going.

The character appeared in a cameo in Star Hunters #7 (October 1978) along with fellow-David Michelinie-creation Starfire (Star Hunters was also a Michelinie creation).

Claw was revived for three issues in early 1978 but was again cancelled at the beginning of the DC Explosion. Issues #13 & 14 were in the Cancelled Comic Cavalcade – that little-seen shelter in which hid the remains of the DC Implosion. The character had a brief stint as a back-up feature in Warlord #s 48 & 49 to wrap up the storyline from its issue #12. 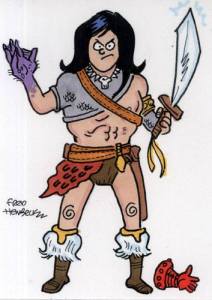 Claw has appeared in modern times: in a cross-over miniseries with Dynamite’s Red Sonja, and in his own revived title as part of DC’s Wildstorm imprint for six issues. Earlier, he appeared in Swamp Thing (with Adventure Line alum Stalker), the 2008 Wonder Woman story arc Ends of the Earth, along with Stalker and Beowulf, and in issue #1 of the series Time Masters Vanishing Point. His demonic gauntlet appeared in Justice League: Cry for Justice as that comic’s villain’s artifact. 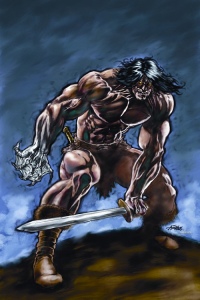 Join me next time for DC’s Bicentennial issue #19: The Brave and the Bold #128