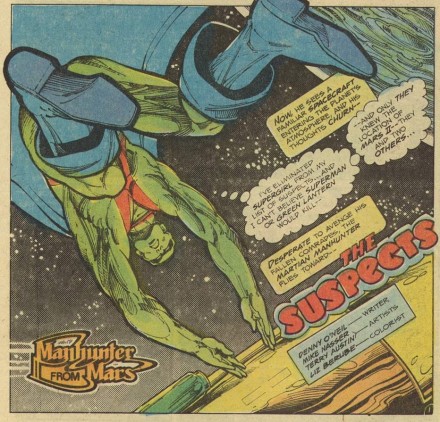 J’onn J’onzz, having eliminated Superman and Green Lantern from his list of suspects, confronts and attacks Hawkman and Hawkgirl in their Thanagarian spaceship and accuses them of R’es Eda’s murder. Hawkgirl rescues her husband and J’onzz from dying in airless space, and they prove their innocence to J’onzz, who apologizes. But N’or Cott has equipped a Superman robot with a bomb and sent it towards Hawkman’s ship, and it is admitted inside.

The reader discovers this story line concludes in the pages of World’s Finest Comic #245.

Frankly, even after all these years, this has to be the strangest dialogue to ever create a cliffhanger in comics… 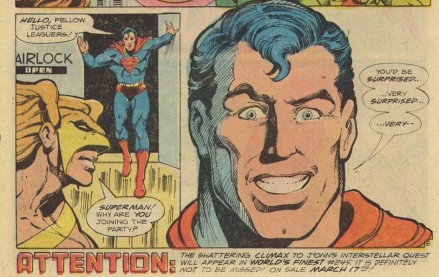 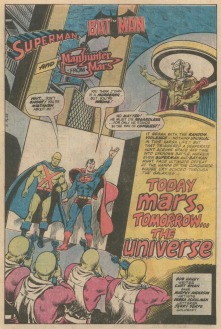 After a mysterious Superman Robot attempts to murder J’onn J’onnz, Superman and Batman lend a hand on the investigation and return to Mars II with J’onn J’onzz after they learned that some Martians are trying to conquer a city, unaware that its atmosphere will prove deadly to them.

J’onn and Superman are unable to convince the Martians to stop their efforts, as they all believe J’onn is a traitor and they shouldn’t heed his words. Meanwhile, Batman finds a Martian who has been affected by the city’s deadly atmosphere and takes him to the rest of the Martians, who are finally convinced of the truth and decide to follow J’onn’s leadership.

Going from Nasser/Austin’s uber-gritty and realistic art to the legendary work of Swanderson is a jolt. A pleasant jolt, true, but still a jolt. The Nasser/Austin team was present in the Green Arrow/Black Canary tales in this same comic!

Jonn Jonzz was, unfortunately, a third-tier (if that) character in the Bronze Age, appearing in a few issues of Justice League of America and in this back-up feature. His fortunes would change in the modern age with his stint in Keith Giffen’s Justice League and his own long-lasting series in the 80s and 90s. He is now also a regular character in the CW/TV series Supergirl. 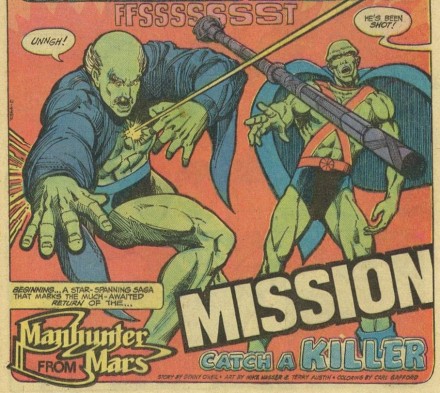 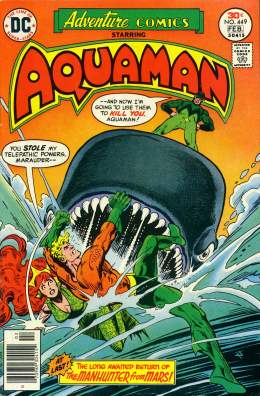 Just as J’onn J’onzz is awarded leadership of Mars II for a second term as popular vote, his friend R’es Eda is cut down and apparently killed by a sniper. Eda’s last words were “was from…was…sol…”, which J’onzz interprets as meaning the killer was from Earth, a world circling Sol (Earth’s sun). Since no one there except the members of the Justice League knew where Mars II was located, J’onzz suspects that, like it or not, one of them may be involved in the murder. Though N’or Cott and other Martians try to stop him from leaving Mars, J’onzz steals one of Mars’s two spacecraft and heads for Earth, with N’or Cott in pursuit.

This is the first Martian Manhunter solo story since House of Mystery #173 (April 1968) and his first solo story of the Bronze Age.

Just after J’onn J’onzz breaches Earth’s atmosphere, his ship is blasted by N’or Cott, destroying it, dazing him, and drawing the attention of Supergirl. The Girl of Steel is mistakenly drawn into battle against the Martian Manhunter until she brings him back to his senses. When N’or Cott releases two more torpedoes, Supergirl intercepts and destroys them. J’onn stops her from pursuing Cott, saying that their attacker “is merely doing his duty.” But he tells her that somewhere on Earth is R’es Eda’s murderer, and he is bound to bring him to justice.

The 450th issue of Adventure comes and goes with no mention – anniversary issues such as this are celebrated and hyped throughout the Bronze (and later) age.

Also with no cover blurb or any hype, this is the first appearance of Supergirl in Adventure since her own series in #424, 4-1/2 years earlier. At the least that could have been hyped as an anniversary “gift” to the readers.

Nowadays, J’onn J’onnz is an integral part of Supergirl’s life in the current television series on the CW…