Arnold Horshack runs into the Kotter apartment and hides under the couch. Arnold tells Mr. & Mrs. Kotter he is hiding from gym coach Rex Bloch.

Bloch finds Barbarino and Washington hiding in an alley and orders them back to the gym. He spots Arnold and Kotter talking outside and orders Arnold back to the school, too. He also tells Kotter to stick to social studies and leave Phys Ed to him!

Kotter starts his lesson for the day in front of sleeping and exhausted Sweathogs.

Barbarino and Epstein fight in the hallway over a girl and Kotter an Bloch intervene. The teachers argue again until Horshack suggests they resolve their issues by racing each other! The Sweathogs vow to help Kotter win!

Horshack trips up Bloch, Epstein switches the route with a detour sign and Barbarino frames Bloch for purse-snatching. Bloch slips and twists his ankle. Kotter walks Bloch the rest of the route, where Bloch admits he isn’t as smart as Kotter but still loves teaching.

Kotter lets Bloch limp across the finish line. Bloch promises to go easier on the kids. 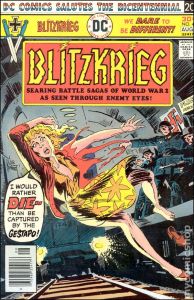 Blitzkrieg was a unique idea in comics and a bold move for DC. It ran for five issues (from February 1976 until October 1976) and was a war anthology focused on the Nazi’s view of World War II. Some stories (such as the main story in this issue and in the first) – featured a soldier aghast at the atrocities of war amongst his more leering, villainous comrades. Other stories’ themes included evil Nazis getting their come-uppance, a common theme among DC’s horror books. The Nazis as a whole were never shown in a sympathetic light, although showing the humanity in individual soldiers was common.

I hope Robert Kanigher and Joe Kubert were proud of the series. They should be. In a few months these co-creators would team again for the equally excellent Ragman book.

The series was cancelled with the next issue.

Three Nazi soliders tour Paris. While riding a tour boat on the Seine, they are shot at and subdue a sniper. They shoot down another sniper pair on the Eiffel Tower – a young couple caught in the slow elevator. At a cafe near Notre Dame Cathedral they invite local ladies for a meal. The brother of one of the ladies shoots at them, killing even his own sister. They return fire and kill him. They visit the Louvre. While walking through the Jewish quarter and watching citizens being removed, a woman throws a grenade hidden in a loaf of bread. They give chase and she throws herself in front of an ongoing train rather than be captured (an image depicted on the cover). There are more assassins at the Arc de Triomphe are defeated, but not before they replace the Nazi flag with their French colors. Why do they take such risks with their lives for such foolhardy things, one of the trio asks. Franz, the thoughtful and bookish member of the trio, who is only interested in seeing the sights for likely the only time, says, “Perhaps we must convince them first … that they ARE defeated.”

The Afrika Korps’ Feldwebbel named Wasser (we never learn his first name) collects souvenirs from every battle to send to his wife. But the British on the road to Cairo have been slim pickings (a watch that has been burning in the sun for days, for example). His company raids a fort and he finds a framed picture of Churchill. Perfect! Not really: the picture is booby trapped and explodes. His comrades joke that he has collected his last souvenir.

Battle Album by Sam Glanzman gave us a brief history and overview of the Chance Vought Corsair during WWII and Korea.

Blitzkrieg Briefs: letters for issue #1 from Craig Kenner of Massillon, OH (positive, and gave the letter column its name); Cadet Captain Ruby S Nelson of Jacksonville, AL criticized anachronistic mistakes on weapons and uniforms; Drury Moore of Springfield, IL told us the German Army was quite democratic among their officers and enlisted while the US Army, who fought for our freedom, was strictly autocratic; and Thomas Edward Bigham of Matt, Mass said the magazine was fair-minded in its portrayal of the Nazis.

Join me next time for DC’s Bicentennial issue #21: Secret Society of Supervillains #2