Cover artist: Ernie Chua (he dates his covers 1975 throughout) 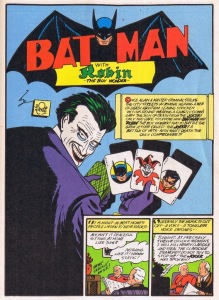 … and has since become the most successful and recognizable bad guy in comics; and only the most obstinant Marvel Zombie would disagree. Even my daughter at three years of age knew the Joker.

Why then did it take until May of 1975 for the Joker to get his own book?  Villains were given their own titles even in the pulp era – the Mysterious Wu Fang and Dr. Yen Sin to name two; both of them spawned from the Fu Manchu novels of a century ago.

Villains headlining comics were not unknown in the Golden Age – Yellow Claw for example. But not by the Silver Age … nothing. What happened in the interrim?

The dearth of superhero titles is what happened. There weren’t that many mask-and-cape-dogooders headlining comics out there (although there were lots of other genres published in the 1950s) and therefore not much room to give a bad guy his own magazine.

The Comics Code Authority is what also happened. Although Marvel’s Doctor Doom had his own series in Astonishing Tales, giving a villain his own book was dicey stuff back then – especially if that villain was a homicidal maniac! To appease the code, Joker’s insanity was toned down and he was always captured or surrendered by book’s end. 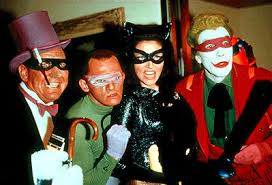 I think the Joker is the one on the far right. It’s hard to tell; they are all wearing masks.

And just so you know, as of today? What is the arch nemesis to Batman’s violent-porn-brooding-sociopath-like? He’s carved his face off and stitched it back on.

Maybe toning back his insanity wasn’t such a bad idea…

If the Joker is/was so popular, why wasn’t the title a smash hit? Throughout the comic’s run (to issue #9 in October 1976) the art was wonderful – this Bicetnennial issue especially features the marvelous work of Irv Novick.

But the stories were uneven. That’s being kind.

The first issue was a battle royale with Two Face. Excellent start. The silly issues afterwards likely didn’t even please the youngsters. The fight with Luthor is embarrassingly bad. Great issues, however, were peppered throughout – the fight with “Sherlock Holmes” and this Bicetennial issue are examples of how good the book could have been.

Joker #10 was plugged in the letter column of issue #9 and in the “Daily Planet” house ad featuring upcoming releases. The cover and some interiors are found on the internet if you do some searching. When this comic was cancelled, why didn’t they run it in Batman Family? Why not then continue the series in its sister title? Were sales that bad? Were the stories not taken seriously? 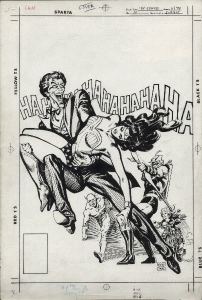 The proposed cover for Joker #10

Would the comic have been more successful with a full-time hero opposing him? Robin or Batgirl?  Perhaps a non-caped hero like Jason Bard or someone else from the back issues of Detective? The comic could have been better and should have lasted a hundred issues!

Wisely, Batman did not appear in the series, not even in a cameo. His image was peppered throughout – a face on a dartboard, for example.  In this issue Batman’s mug was on a safety net and a “bullet” that popped out of a toy gun.  Thus it is hard to count this as a “Batman” title.

This was only one of four Bicentennial comics I owned at the time of their publication. It took me 38 years to finish the collection!

Disguised as the Scarecrow, Joker steals a canister of fear formula from Star Labs in Metropolis. An angry Scarecrow frightens the location of Joker’s Ha-Hacienda from a former lackey. Joker discovers the Scarecrow’s impending visit and leaves a message to meet him at the local zoo. There, Joker uses the fear formula via a swarm of moths to scare away guards and patrons while he steals a hyena mural for his hide-out!

The Scarecrow flies in and battle ensues! Scarecrow’s pet crow Nightmare pinches out Joker’s nose plugs while Scarecrow uses acid to release the gas from Joker’s canister. Gas billows out and Joker is on his knees, terrified. The Scarecrow giggles. Giggles? Yes, Joker switched the fear formula for his own laughing gas! His fear was feigned!

Scarecrow is caught by the police and Joker makes it back safe and sound to his own padded cell at Arkham Asylum.

Death toll (despite the attempts to assuage the Comics Code Authorities): two guards and one former henchman.

The Joker’s Ha-Hacienda: letters answered by the Joker himself, mostly for Joker #6! Likely Bob Rozakis answered the letters; these were mostly one-sentence questions and/or comments (“Who is Moriarty?”) answered in a snarky style (“I came home to find all my Batman comics burned, did you do it?” “No, if I did it, I would have burned them while you read them!”). Snarky, but not mean – answers were funny and the insults gentle. This is the Joker, not Murray Boltinoff!

Lots of mail for a failing comic? True, but the nature of the letter column – and answer by the Joker himself – likely had readers send in missives they otherwise would not have done!

This issue is reprinted (as is the entire series) in The Joker: Clown Prince of Crime trade paperback.