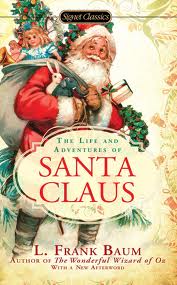 One of the three books I make a point to read during Christmastime is The Life & Adventures of Santa Claus by L. Frank Baum.  It was published in 1902. He had already published the first two of his books set in the merry old land of Oz and those, his books on nursery rhymes and this biography of Claus helped firm his reputation as a writer of children’s stories.

I mentioned this book a bit when I did my last National Adoption Awareness Month Spotlight – a whimsical biography of Kris Kringle from this book and the animated classic “Santa Claus is Coming to Town”. It partly inspired me to do this blog …

The book has an excellent Wikipedia page: https://en.wikipedia.org/wiki/The_Life_and_Adventures_of_Santa_Claus

This is a condensed version from Wikipedia:

Santa Claus, as a baby is found in the Forest of Burzee by Ak, the Master Woodsman of the World, and placed in the care of the lioness Shiegra. The Wood Nymph, Necile, breaks the law of the forest and takes the baby because she desires to raise a child of her own as mortals do, convincing Ak that since he made the law, he can allow an exception, and agrees to have both Necile and Shiegra care for the baby. Necile calls him Claus, meaning “little one” in the old Burzee language.

He becomes well known for his kind acts toward children, including given them presents of carved animals called “toys”. Soon, the immortals begin assisting him, the Ryls coloring the toys with their infinite paint pots (the first toy was not colored).

The Awgwas, evil beings who can turn invisible, steal the toys that Claus is giving to the children, because the toys are preventing the children from misbehaving. This leads to Claus making his journeys by night and descending through chimneys when he is unable to enter the locked doors.

As his fame spread far and wide, he became recognized as a saint, earning the title “Santa” (“Saint” in most Romance languages). Rumors Claus would have disagreed with say that naughtiness will make him stop bringing toys, but Claus “…brought toys to the children because they were little and helpless, and because he loved them. He knew that the best of children were sometimes naughty, and that the naughty ones were often good. It is the way with children, the world over, and he would not have changed their natures had he possessed the power to do so.

“And that is how our Claus became Santa Claus. It is possible for any man, by good deeds, to enshrine himself as a Saint in the hearts of the people.”

At the time there was no real lore about the jolly old elf – drawings by Thomas Nast and others and the poem “A Visit from St. Nicholas” by C. Clement Moore.  This was long before Rudolph and the various movies and children’s television shows, so Baum had a blank canvas with which to work.

It is high fantasy and firmly set in the imagination of Baum’s style. It’s a beautiful and charming book to read to yourself or a young one. He may ask you where Topper the Penguin or the Winter Warlock are … you’ll have to explain this is another version of where Santa came from.  Odd that in both this book and the iconic TV show “Santa Claus is Coming to Town” the young Claus is a foundling waif taken in my a magical people…

Ironically, the production company that made “Santa Claus is Coming to Town” – Rankin/Bass – known also for “Rudolph the Red-Nosed Reindeer”, “Frosty the Snowman” and their progeny – also produced a stop-motion version of “Life and Adventures…”. It was the companies last stop-motion holiday special.

The book is in the public domain and can be read online or saved as a pdf file. I found a copy here: http://www.ibiblio.org/ebooks/Baum/Santa_Claus.pdf

It is good practice for people not used to ebooks. Then you can purchase one of my three books available online (crass commercialism is also a Christmas tradition!):

Abby’s Road, the Long & Winding Road to Adoption and how Facebook, Aquaman and Theodore Roosevelt Helped;

Toddler TV: A Befuddled Father’s Guide to What the Kid is Watching; and

The Brave & the Bold: From Silent Knight to Dark Knight, an index to the DC comic book.