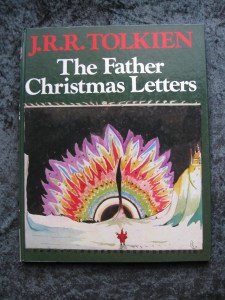 Did you know JRR Tolkien wrote a Christmas book? Well, he did and he didn’t. Taken from Wikipedia:

The Father Christmas Letters, also known as Letters from Father Christmas, are a collection of letters written and illustrated by J. R. R. Tolkien between 1920 and 1942 for his children, from Father Christmas. They were released posthumously by the Tolkien estate on 2 September 1976, the 3rd anniversary of Tolkien’s death. They were edited by Baillie Tolkien, second wife of his youngest son, Christopher. The book was warmly received by critics, and it has been suggested that elements of the stories inspired parts of Tolkien’s Lord of the Rings.

The stories are told in the format of a series of letters, told either from the point of view of Father Christmas or his elvish secretary. They documented the adventures and misadventures of Father Christmas and his helpers, including the North Polar Bear and his two sidekick cubs, Paksu and Valkotukka. The stories include descriptions of the massive fireworks that create the northern lightsand how Polar Bear manages to get into trouble on more than one occasion.

The 1939 letter has Father Christmas making reference to the Second World War, while some of the later letters featured Father Christmas’ battles against Goblins which were subsequently interpreted as being a reflection of Tolkien’s views on the German Menace.

The letters themselves were written over a period of over 20 years to entertain Tolkien’s children each Christmas. Starting in 1920 when Tolkien’s oldest son was aged three, each Christmas Tolkien would write a letter from Father Christmas about his travels and adventures.  Each letter was delivered in an envelope, including North Pole stamps and postage marks as designed by Tolkien.

Prior to publication, an exhibition of Tolkien’s drawings was held at the Ashmolean Museum. These included works from The Hobbit, Lord of the Rings, and The Father Christmas Letters.  The first edition was by Allen and Unwin on 2 September 1976, three years after Tolkien’s death. The Houghton Mifflin edition was released later that year on 19 October. It was the third work by Tolkien to be released posthumously, after a collection of poems and the Guide to the Names in The Lord of the Rings. Edited by Baillie Tolkien, the second wife of Christopher Tolkien, it includes illustrations by Tolkien for nearly all the letters; however, it omitted several letters and drawings.

The reception to the first two works published posthumously had been warm, which was subsequently thought to be due to Tolkien’s recent death. The response to The Father Christmas Letters was much more measured and balanced. Jessica Kemball-Cook suggested in her bookTwentieth Century Children’s Writers that it would become known as a classic of children’s literature, while Nancy Willard for The New York Times Book Review also received the book positively, saying “Father Christmas lives. And never more merrily than in these pages.” In 2002, an article in The Independent on Sunday described the work as rivalling “The Lord of the Rings for sheer imaginative joy”.

Paul H. Kocher, whilst writing for the journal Mythprint, suggested that the creatures in The Father Christmas Letters may have been a precursor to those which appeared in Tolkien’s later works such as the Lord of the Rings trilogy, a view which was shared by Laurence and Martha Krieg in the journal Mythlore.  For example, the 1933 letter features an attack on Polar Bear by a band of goblins.  The Kriegs suggested that the wizard Gandalf may have been developed from Father Christmas

I agree. Tolkien’s love of the fantastical and his Middle Earth mythology cannot be avoided in the book. Father Christmas even mentions giving copies of The Hobbit to the children as gifts in the 1937 letter. Elves become more and more prominent as the years progress and the battle with the goblins is an obvious dress rehearsal for things to come.

But the book is filled with whimsy and delight. Remember – this was meant for his children, not for publication.  You can feel the love and humor in every letter. The last letter is even quite sad – Father Christmas admitting that this is likely his last letter to the youngest child.

I did not even know of the existence of this book until a few years ago. I found a copy on Ebay and have read it every year. I found two copies actually – the first printing and a later one with more letters and even photographs of the envelopes he created.

It gives me great ideas for letters from Santa to my daughter!

This work is certainly not as dark and epic as LOTR or even the Hobbit, and the critics are correct – this book can stand proudly on the shelf with those classics!

This book is NOT in the public domain but can be easily found on Amazon or Ebay. Examples of a letter and artwork can be found here: http://www.openculture.com/2013/12/read-j-r-r-tolkiens-letter-from-father-christmas-to-his-young-children.html

Top of the World

Near the North Pole

I am dreadfully busy this year — it makes my hand more shaky than ever when I think of it — and not very rich. In fact, awful things have been happening, and some of the presents have got spoilt and I haven’t got the North Polar Bear to help me and I have had to move house just before Christmas, so you can imagine what a state everything is in, and you will see why I have a new address, and why I can only write one letter between you both. It all happened like this: one very windy day last November my hood blew off and went and stuck on the top of the North Pole. I told him not to, but the N.P.Bear climbed up to the thin top to get it down — and he did. The pole broke in the middle and fell on the roof of my house, and the N.P.Bear fell through the hole it made into the dining room with my hood over his nose, and all the snow fell off the roof into the house and melted and put out all the fires and ran down into the cellars where I was collecting this year’s presents, and the N.P.Bear’s leg got broken. He is well again now, but I was so cross with him that he says he won’t try to help me again. I expect his temper is hurt, and will be mended by next Christmas. I send you a picture of the accident, and of my new house on the cliffs above the N.P. (with beautiful cellars in the cliffs). If John can’t read my old shaky writing (1925 years old) he must get his father to. When is Michael going to learn to read, and write his own letters to me? Lots of love to you both and Christopher, whose name is rather like mine.

On Christmas Eve we are planning on seeing the final Hobbit movie. This will get you in the mood!