STALKER: BEWARE THE MAN WITH THE STOLEN SOUL

I loved this comic. I still have issue #1 from when it was first published (and Justice Inc too, by the way). It enthralled me as a youngster. Steve Ditko & Wally Wood’s combined art was stupendous. The scene where the demon takes Stalker’s soul is breathtaking. As an adult, thanks to ebay and other internet stores, I finally collected the rest of the series. Nothing was concluded, of course. But I got them! Despite my love of the first issue, I could see its limitations.

Trouble was, until the end of the four issues it had only one plot – Stalker wanted his soul back. This sets up a one-note plot which, if resolved, ends the story. Gilligan gets off the island, Stalker gets his soul back – show’s over. Still, it worked for “The Fugitive”… 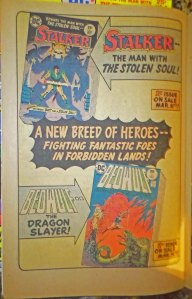 But with Conan the Barbarian dominating the sword and sorcery genre in comic books, and other pretenders doing fair if not well – such as Claw the Unconquered – there just wasn’t room for the weird comic about the man with the lost soul. Perhaps he was too much of an anti-hero. Later interpretations of him as a supervillain make me sad.

Too bad, the four original issues were real gems.

“Beware the Man with the Stolen Soul” appeared on every cover.

#1. July 1975, “Quest for a Stolen Soul”, Paul Levitz (w/creator), Steve Ditko/Wally Wood (a), Joe Orlando (e); an abandoned boy living as a street rat yearns to be a sword-wielding knight! He begs that land’s Baroness to train and serve her as a warrior. She instead uses him as a slave. He escapes and begs the god of warriors Dgrth to be made a warrior. Dgrth agrees – the child will be given inhuman martial skill in exchange for his soul. Deal! Wait, you want the soul NOW and not when I die? Wait! Too late! Stalker threatens to kill the Baroness in one year – making her remaining year of life a torment – and slays his former slave-master. He feels no joy or satisfaction as he has no soul. He vows to get his soul back!

A full-page house ad for Stalker and Beowulf Dragon Slayer is in this comic.

The text page includes a bio of Paul Levitz and a map of some of Stalker’s world! A map! No fantasy epic is complete unless it contains a map!

How I yearn to see the tale of vengeance against the Baroness in the next year. The editor says in a letter column that by issue #7 Stalker will be in the northern lands wherein lie dragons. Issue #7, on a bi-monthly schedule – would be the year anniversary. Did the Baroness hie herself to northern lands? What a great multi-parter that would have been – Stalker tracking down the Baroness across the map!

#2. September 1975, “Darkling Death at World’s End Sea”, (same team); F’lan, the prior of Dgrth’s temple at World’s End Sea, knows where lay the gateway to Dgrth’s domain. Stalker is captured by F’lan, who will sacrifice the marked one to Dgrth. Stalker escapes with the help of Merilla on the promise Stalker will take her with him.

The Ditko/Wood art is just as good as the first issue – the World’s End Sea is just that! Just past the shoreline the sea drops off into eternity. Grand stuff!

The full-page Adventure Line ad appears in this issue.

#3. November 1975, “The Freezing Flames of the Burning Isle”, (same team); The Burning Isle, on which – so Stalker learned from F’lan – hides the portal to Dgrth’s realm. Stalker befriends Srani, a witch banished to the island one year ago. She tells that the gods and demons man worships were in fact ancient aliens from the stars who were themselves banished from this island to their various domains. Is Srani more than she seems?

The letter column says this could be Stalker’s last issue depending on the sale numbers.

My copy of this issue is a Mark Jeweler variant: a cardboard insert advertising Mark Jewelers was distributed on or near military bases. Not only did this soldier defend my freedom, he bought a dandy comic book too!

#4. January 1976, “Invade the Inferno”, (same team – the letter column reveals Ben Oda and Joe Letterese (l), Tatjana Wood, John Albano Jr & Carl Gifford (i) through the series); Stalker invades hell, fights its minions and raises an army against Dgrth. Stalker confronts the demon and demands the return of his soul. He cannot return it – only Dgrth’s death can free Stalker’s soul; and only when a god is forgotten can it truly die. Then Stalker shall slay all evil until his soul is returned. So he vows!

The letter column says this issue wraps up the first part of the series in case of cancellation. They were right!

If the series had continued it would thus head to other plots – now Stalker seeks to destroy all evil rather than “just” getting back his soul: a MUCH more open storyline with lots of potential (“The Fugitive” wasn’t just him hunting for the one-armed man – there were lots of great stories in between…). Perhaps he can still find his humanity by helping others – even if his reasons are selfish. Perhaps he would have found allies or (gasp) friends.  How a man with no soul would handle allies and friends would make for some interesting character development – even for only a panel or two, as was normal with 1970s comic books.

If it had only taken less than four issues to get to that point. Between the art and that storyline it might have attracted some attention.

Stalker appeared in JSA Returns as a demonic supervillain, in Swamp Thing (with Adventure Line alum Claw), and in the 2008 Wonder Woman story arc Ends of the Earth as the villain – battling the Amazon with Claw and Beowulf at her side. Stalker replaced Beowulf as the back-up feature in issues #4-7 of the DC New 52 magazine Sword of Sorcery.

My favorite of the Adventure Line books, if only sentimentally. The art is breathtaking!  It’s Ditko & Wood, folks! DITKO! WOOD!