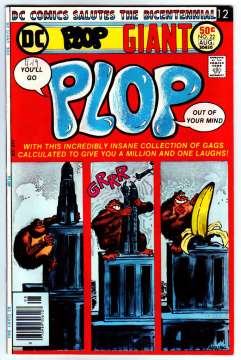 Plop!? Plop!? I’ve dreaded this moment ever since I decided to do a blog series on the comics that made up the “DC Salutes the Bicentennial” event. How on earth am I going to do an issue synopsis on Plop!?

Plop! was DC’s attempt at copying the underground comics common at the time. It started as a small humor strip in House of Mystery, but that didn’t quite fit the genre. Well, why not take the strip and similar ideas by (at the time) new young hipster writers like Steve Skeates and put them all into their own comic?  Horror comics have had their skeletal fingers in the western genre (Weird Western Tales), war titles (Weird War Tales), even romance books (Dark Mansion of Forbidden Love), so why not humor?

Thus was published the first issue of the Magazine of Weird Humor on October 1973 through 24 issues ending in November of 1976.

Legend, or in this case Steve Skeates, says it was originally going to be called “Zany”. Skeates, Orlando and Carmine Infantino discussed the title. Skeates said it could be called anything as long as it was funny. Carmine Infantino made the snarky comment that they couldn’t call it, for example, “Plop!” They could. And they did.

Plop! contained mostly single panel or single page strips. A few strips ran for several pages.  Jokes and puns were written in the blanks between panels – right-side-up, upside-down, sideways, etc.  What city is made out of hard stone? Flint. In what city do people wander? Rome.

The illustrated gags were simple and silly but always done in the macabre or horror vein. A doctor walks into a waiting room to tell a vampire, “It’s a bat!” That sort of thing (and using “vampire” and “vein” in a paragraph together is another example. Hey, this stuff writes itself!)

Our hosts for all this frivolity were Cain from House of Mystery, Abel from House of Secrets and Eve from Secrets of Sinister House (and other comics – she moved around a lot…).

The Table of Ploptents {sigh} for the issue is as follows (the creators – writers and artists are unknown unless otherwise noted):

The Kicking Man – John Albano. An abusive man kills the father of a beautiful girl to mary her. He kicks things when he is angry – including his new bride. The bride asks a witch to curse him. He has his leg amputated because of the curse. Does that stop his kicking? Kind of – now he whacks people with his severed leg… 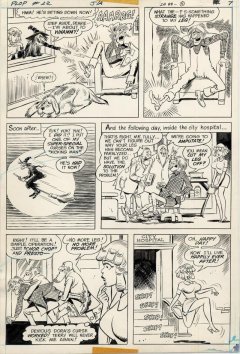 The Plopular Person of the Month – by Basil Wolverton. This was a regular feature in the comic by this legendary artist!

Maybe I Just Have Big Bones – John Albano & Bill Draut. A fat man takes enough pills to lose several hundred pounds to please his wife. Now he has too much loose skin! A face lift makes him handsome! It even shows off the striking cleft in his chin! No, that’s his navel…

Peter Pureheart – Joe Orlando ( w ) – Orladno? I like when the management gets their hands dirty! & John Albano (a)

The Dirty Thief – Steve Skeates ( w ) and the legendary Sergio Aragones (a). A husband tired of his wife’s compulsive cleaning tries to rob a bank to make enough money to divorce her. He creates a formula turning him into micro-size particles so he can sneak under the bank vault. Before he can leave the house, his wife vacuums him up and throws him in the trash…

Animal Plops – Don Edwins ( w ) & Dave Manak (a). An experiment to see why elephants are afraid of mice. Ends up they swallow elephants in one gulp!

Plopular Poetry – written and drawn by the incomparable Wally Wood! One creation was the Mangaroo!

The Cross-Eyed Pussycat – John Albano ( w ) and Scarpello (a). I remember this strip from other comics – usually a one-panel fill-in to complete the page. An internet search cannot find any other appearances other than Plop, but this strip was used as fill-in elsewhere in the DC Universe…

A Tale Before Sunrise – Steve Skeates ( w ), Vincent Alcazar (a). A vampire hunter sees a caped figure rounding a corner. He attacks it with a stake! In the last panel he is arrested for murdering Batman! Plop was one of the stranger team-up suggestions in an issue of The Brave and the Bold. The editors in that comic may have published it to “prove” the reader was randomly naming DC “characters” to try to humiliate him, but a comic filled with Batman-themed gags would definitely be one for the history books! This strip was reprinted in the Best of DC digest #63 (an all-Plop issue).

Monster Plops – Ron Edwards ( w ) & Dave Manak (a) – in one gag a vampire hunter opens a coffin and hammers in a stake. In the last panel the vampire is leaping in pain with a stake out of his rear end. How was I to know he slept on his stomach, the hunter asked.

Gee, a plot synopsis was possible…

Plop Drops, letter column. The letter were something straight out of “Catcher in the Rye”: kids complaining about how awful the magazine was … all in fun, supposedly…

Jimmy Holcomb of Mesquite, TX asked why they started putting ads in the comic; Anonymous (Plop is infesting his favorite store and chases customers away), Linus Sabalys of Laval PQ, Canada predicted Plop will burn out soon (he was right! It lasted only two more issues!), Ron Lindsey of Augusta, GA (Plop will make you sick, scare away cockroaches and can be used as a weapon in the next war), Ken Kemble of San Antonio, TX lists Plop’s good qualities: (a blank paragraph), in a separate paragraph the editor asks that anyone submitting jokes and gags needs to provide a return envelope, Mike Thompson of Lockemup Prison enjoys Prison Plops the most, Mott the Hobbit of Middle Earth asks simply … why? Unsigned has a long letter describing his prison life and the effect the magazine has on him and his cell mate at the insane asylum, Mike White of Mackinaw, IL says Plop is the worst, by that he means the best … etc.,  Anonymous of Glutton, VT wants more sergio Aragones – although he asks why Aragones would leave MAD to work at this rag… and the editor announces they will no longer publish anonymous/unsigned letters. The person answering/commenting is likely Paul Levitz.

The truly sad thing? After almost 40 years there will still be ten-year-olds reading this issue and wetting themselves from laughing so hard…

I kid. Truthfully? Kudos to DC for trying to honestly do something different. Even Marvel’s attempt at humor was stuck firmly in the MAD vein or comics such as Not Brand Echh, a satire with its toes still dipped in the superhero genre.  Plop lasted for three years. The reprints in various “Best of DC” digests in the late 1970s are some of the most sought-after of that series. Plop is not too expensive on the secondary markets (but not cheap either) yet devilishly hard to find!

You might say even after all these years the comic is still very Plopular.

Join me for my next review of DC’s Bicentennial comics! Who else would be issue # Unlucky 13 except the Losers of Our Fighting Forces.