Batman debuted in Detective Comics #27 cover dated May of 1939. The next spring in 1940 he was given his own comic. Batman #1 featured the debut of iconic villains the Joker and Catwoman. For the past 70+ years, renamings and renumberings notwithstanding, there has been a Batman comic book published ever since.

By the time of the Bicentennial, though, Batman was suffering a lull in sales, if not popularity. The popularity of the television show in the 1960s turned the comic into a campy child-like (or even child-ish) version of the Caped Crusader.  The 1970s turned him back into the dark knight of vengence. The pendulum swung even farther in that direction in the 1980s and has yet to swing back to even a middle ground. That is in the future, however, on July 1976, Batman the character and the comic were somewhere in between…

“The Riddle of the Man Who Walked Backwards”, David V. Reed ( w ), Ernie Chua and Tex Blaisdell (a)

A Black-Lagoon-ish sea creature terrorizes the sitizens of a Florida resort town. A vacationing Bruce Wayne and girlfriend investigate and fight off the beast near a cave on the beach. 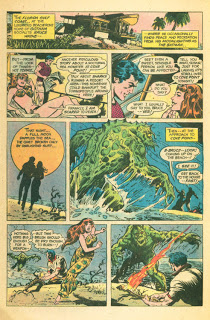 The next night Batman stakes out the cave and spots a man land his small boat on the beach and walk backwards into the cave – sweeping away his prints.

Batman enters the cave and fights off the stranger only to be knocked out by a third man!

Batman awakes … as Bruce Wayne! His assailant is dead and Wayne arrested. He escapes from the local jail and meets Alfred. Alfred had followed Batman to the cave and quickly removed his costume to protect his identity from the killer and the police!

Escaping, Batman – back in costume – searches the cave for clues and finds oily goo, that leads him to an off-shore oil rig. He overhears crooks talking about a “drop”. They catch Batman and throw him in a huge tube under the sea.

Escaping again, Batman goes to the new drop point discussed by the crooks in the rig – their old drop point, the cave, is now compromised. He fights the sea creature again – it is one of the crooks in disguise, and stops their drug-smuggling ring.

Bruce Wayne is released and returns to Gotham City, where an unbelievable naive Jim Gordon believes that he and Batman being at the same Florida resort is entirely a coincidence…

Join me for my next review of DC’s Bicentennial issue #12, a little magazine called PLOP!