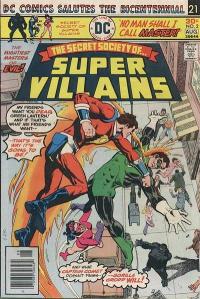 I loved Secret Society of Supervillains. I frickin’ loved it!I got a late start on collecting the series – My first issue was #6 after the Darkseid/Manhunter introductory story arc finally ended. By now it was 1977, when I started seriously collecting comics instead of getting the odd issues from friends and family. But I got every issue after that and was very sad when it was cancelled with issue #15 during the DC Implosion. Over the years I trolled the back issue markets until I completed the collection. Two more issues were written and drawn and reproduced in the famous Cancelled Comic Cavalcade, and the finale of this story arc (started in #15) that would have concluded in #18 was written and discussed in Back Issue #35. The Amazing World of DC Comics #11 reprints the original first issue with a different line-up and direction.

I told you I loved this series…

A mysterious benefactor formed an “anti-Justice League” led by a clone of the original Manhunter. Founding members included Captain Cold, Gorilla Grodd, Sinestro, Star Saphire and others. In issue #2 more intrigue is revealed…

Captain Comet returns from obscurity a 20-year mission in space (what IS it this month with missions in space? See Superman and Justice League of America…). While noting the change in clothing styles, Comet comes across a battle between Green Lantern, Gorilla Grodd and Hijack (a former member of the Royal Flush Gang, but still with the card motif).

Since Lantern attacked first, Comet assumes he is the bad guy in the brawl and knocks him out and saves Grodd and Hijack. He reveals to Grodd that he can read his thoughts.

At the Society’s headquarters, Grodd (who has in turn read Comet’s mind) reveals to the SSOSV Comet’s origin, recapping Strange Adventures #9 & 10 from 1951.   Since Comet knows nothing of superheroes, the SSOSV ask him to join their group as a dupe in their fight against good!

Later, Comet finds the graves of his parents and friends. Manhunter approaches and reveals that the SSOSV are criminals. Comet knows. Grodd’s mental block is good, but not THAT good. Manhunter reveals he is ALSO fighting on the side of the angels. They are both attacked by Mantis of Apocalypse! They fend off Mantis, who escapes before he completely runs out of power.

Manhunter takes the SSOSV to the underground laboratory of their benefactor and reveals him to be Darkseid! Mantis attacks again! To be continued…

The Superman Hostess ad appears in this comic rather than the Joker ad. Don’t they put ANY thought into these things?

The Sinister Citadel: Gerry Conway’s soapbox asking for suggestions appears (see All Star Comics #61). Also, there is text of the publication history of Captain Comet, a bio of Sinestro and new writer David Anthony Kraft.

Join me next time for DC’s Bicentennial issue #22: Superboy and the Legion of Superheroes #218

One thought on “Secret Society of Supervillains #2 – Bicentennial Bad Guys!”