I must admit it is a coincidence that I am posting this blog 77 years to the day when Action Comics #1 hit the stands! But what a wonderful way to celebrate!

Superman, the comic and the character, was DC’s sales juggernaut in the 1970s, even before the movie starring Christopher Reeve. The annual sales statement “required” of every comic book published showed this magazine was selling 216,122 copies*. A good amount for the time – and today as well!

Superman debuted in Action Comics #1 cover dated June 1938. One year later – cover dated June 1939 – Superman was given his own comic. It was the first comic book devoted to the adventures of one superhero. The first issue reprinted the serial from the first few issues of Action Comics as well as original material. And for the past 75 years, renamings and renumberings notwithstanding, there has been a solo Superman series published ever since.

Other than that, c’mon if you don’t know who Superman is, are YOU reading the wrong blog. But for more of a biography, check out my previous blog post spotlighting famous adoptees real and otherwise: https://michaelgcurry.com/2014/11/05/the-most-famous-adoptee-of-all-national-adoption-month-spotlight-on/

The Joker’s Hostess ad appears in this comic.

A new criminal organization, Skull, who would torment Superman and Metropolis for many years to come, enters – filling the gap left from the now-defunct Intergang. 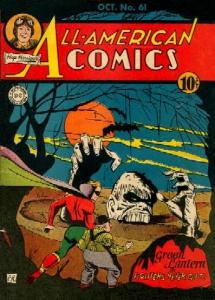 Solomon Grundy, trapped in Slaughter Swamp on Earth 2 by the Green Lanterns of Earth 1 and Earth 2 (Hal Jordan and Alan Scott back in Justice League of America #92), realizes that if his hated enemy Green Lantern has a double on another earth, he might have one, too! Somehow he teleports to Earth 1 Metropolis to search for HIS counterpart (this set a probably-unrealized precedent: The Brave and the Bold #200 featured a villain, Brimstone, who was so outraged at the death of his earth’s Batman that he transported his mind to his counter-part on Earth 1 to battle THAT Batman – obviously you can teleport between earths with raging emotions as well as a cosmic treadmill!). Superman and Solomon Grundy battle, while the swamp takes over the city. Superman disguises himself as an Earth 1 Solomon Grundy and lures his doppleganger to the moon, stranding him there. 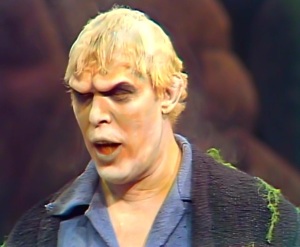 And that was the end of Solomon Grundy … not by a long shot!

All the while, Clark Kent and his new girlfriend/groupie Terri Cross report on the battle. Clark Kent? Actually, it was Steve Lombard hypnotized by Superman into protecting his antagonist’s secret identity.

The last several issues sought to change the old status quo of the Superman mythos – giving Kent a new girlfriend and giving him (and Superman) more spine and attitude. “This isn’t even a challenge,” he tells some Skull cronies…

Not that Superman #300 needed the extra sales boost, but why not bend the rules a bit and delay the release of that milestone until the July cover date and make it a Bicentennial comic? Marvel did that with Captain America #200!

* Here is a sample of sales figures published in DC’s annual “required by law” financial statement for 1976:

Next in my blog series of DC Comics’ Bicentennial issues: House of Mystery #243