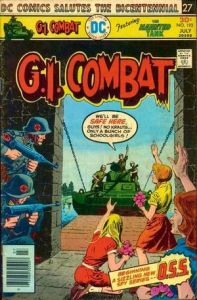 GI Combat was another comic acquired by DC when they bought out Quality Comics. I wrote this in my reviews of the Bicentennial issues of Blackhawk and Freedom Fighters … Quality Comics was a successful comic book company during the medium’s golden age. It introduced Kid Eternity, the Blackhawks, the much-lauded Spirit and Plastic Man to comics. The company closed shop in the mid-1950s and the catalogue of characters was bought by DC/National. They continued only four of Quality’s titles: GI Combat, Plastic Man (although DC would not publish a Plastic Man comic until the 1960s), Blackhawk, and Heart Throbs – all but the latter were still being published by the time of the Bicentennial (Plastic Man would get much more popular in the coming decades).

It was a standard anthology with standard war stories, but eventually a starring feature took over as lead.  The Haunted Tank debuted in issue #87 (May 1961) and continued as the main feature until they shared cover billing with The Mercenaries in the comic’s later issues. 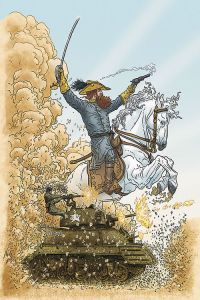 Confederate General J.E.B Stuart’s ghost is sent to guard his descendant and name-sake Jeb Stuart during his battles on the European front in World War II. In one story I remember fondly, Stuart’s tank is destroyed and replaced by a Sherman. “Sherman!” The ghostly Stuart was aghast that his descendant would use a tank named after a Union general! A great story, but I cannot find the specific issue.

With issue #201 (May 1977) GI Combat became a Dollar Comic with increased page count and all-new stories such as Tales of the OSS. It returned to “normal” size with # 282 (March 1986) – making it one of the last Dollar Comics. By now the Haunted Tank was occasionally replaced as the lead feature by The Mercenaries, a fighting troupe set in modern times. The last issue was #288 (March 1987). It was the second-most successful war comic DC produced next to Sgt. Rock.

The comic is also notable for being the debut vehicle for The Losers, who moved to their own starring feature in Our Fighting Forces. “The Rock”, a one-shot character, arguably the prototype of Sgt. Rock, had his one appearance in a 1959 issue.

GI Combat was revived as part of the “New 52” line, but was cancelled after seven issues. The Haunted Tank was also revived with Stuart, the WWII descendant, haunting his granddaughter in modern times. A few other revivals also proved unsuccessful.

The Haunted Tank crew is tasked with killing Field Marshall Erwin Rommel. A squadron of tanks and planes would be expected and fought off, but a single recon tank might make it through.

As the tank crosses a bridge, it is attacked by two fighters. Jeb is severely injured, leaving Gus to take command and stop the fighter planes. He sees JEB Stuart, who warns him of dangers to come. The other crewmen, Rick and Slim, think Gus is imagining things just like their commander.  They destroy the Krauts and cross the bridge.

But the tank’s treads bust and they have to hoof it with their injured commander (note the change to a WWII-like vernacular…). They are met by the teenage students of an all-girl school at the Van Maltz castle, led by its Baroness. Helga is angry that the Baroness would allow verdamt Amerikaische soldats into their home. She is locked away until she calms down and the Haunted Tank crew are fed and healed. Jeb and the Baroness share a kiss.

Someone releases Helga, who immediately gets “help”. The next morning Helga sits in the lead tank of a squadron attacking the school. Sitting beside her in command – Rommel!

Jeb shoots at the tanks with a crossbow using dynamite sticks instead of bolts – blasting the tanks to smithereens! Rommel’s lead tank makes it to the drawbridge where a mysterious figure is cranking the handle to lift the wooden bridge. Rommel shoot and kills the figure, but too late! The tank falls into the moat – killing all. Jeb discovers the mysterious figure was the Baroness. She saved her enemies from her own people.

Later the crew discovers it was NOT Rommel in the tank at all, but a double instead.

OSS: Office of Strategic Services is a top secret branch of military intelligence. These spy tales were featured throughout GI Combat, especially in its Dollar Comic days. It was also given its own lead feature in the last issue of Showcase (#104). The feature debuts here! Other than the Joker’s Daughter in Batman Family #6 and Earth Man, kind of, in Superboy starring the Legion of Superheroes #218, these three were the only “debuts” featured in the Bicentennial comics.

“Target for Tonight – Me!” Bart Regan (w), Ric Estrada (a). Victor Lazlo (intentionally to be confused with Paul Henreid’s character from Casablanca …) and two others parachute into occupied Czechoslovakia. His companions are shot while landing and he is captured and taken to Gestapo HQ (which is made to look like a hospital and therefore, not bombed by allied aircraft) and searched. He is Czech and returned to exact revenge on the Nazis for killing his Jewish wife. He is interrogated and ordered to be hung from the gallows when an Allied bomb raid destroys the headquarters and everyone in it – including Lazlo. Seems the Nazis missed the transmitter implanted in his forehead by the OSS. He was captured intentionally and offered his own life to defeat the damned Boche!

Let’s Make Tracks: letters for #286. A positive letter from Michael Lapsley of Morrow, GA asking about prior crewmembers of the Haunted Tank, Paulo Mariorann of Parma, Ontario asked about the Haunted Tank’s theater of operation – various places in Europe in one issue and Burma the next? The editor explains (as with Sgt Rock) these stories are not in chronological order, Mike Karvalas of Chicago, IL questioned the Tank being in Greece, explaining that there were not many US soldiers in Greece – the editor explains that the Haunted Tank crew were some of the few, Tom Kelleher of Norwalk, Conn. Criticized JEB Stuart’s old man appearance when he was a relatively young man – he is a ghost, says the editor – and he looks like a ghost!

Join me next time for DC’s Bicentennial issue #28: The Unexpected #174