The title is prefaced with “Have You the Nerve to Face …” 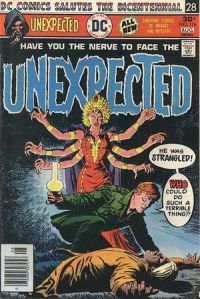 Tales of the Unexpected was a science fiction anthology debuting in March of 1956 and lasting until issue #222 (May 1982). It changed its title to The Unexpected as of issue #104 in January 1968 and slowly changed formats from science fiction to horror. Online comic shops and guide books refer to this series as “Unexpected, The (1968)”. It became a Dollar Comic with issue #189 (February 1979) and merged with The Witching Hour and House of Secrets until issue #195 (February 1980) before returning to its standard format. The Witching Hour/House of Secrets merger was abandoned as of issue #206 (January 1981). Most of these last issues featured the adventures of Johnny Peril, detective of the occult. 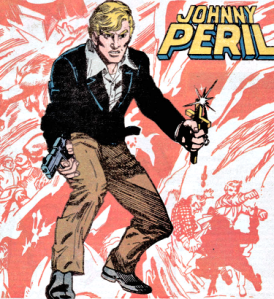 Before that, the only lasting feature of note was in the mid-1960s with Tales of the Green Glob.

I’ll bet you weren’t expecting that…

Dr. John Terril, world-renowned psychiatrist, is hired to analyze the paranoid president of a foreign republic. He is informed by Scorbo, the president’s lackey and an obvious germophobe that there really IS a plot to kill the president (it is not said what his position is or relation to the president)! If Terril can withstand the Gauntlet of Fear, he can infiltrate the organization led by the Great Bajir. He is thrown into an underwater cave and attacked by a giant squid and piranhas. He panics, faints and wakes up in a cell. Scorbo is really the Great Bajir and he is brainwashing Terril into one of his thralls to kill the president!

The brainwashing continues: bats, spikes and skulls haunt Terril. Even the roaches in the cell panic him. But he has an idea. He starts crawling in his cell like a baby. Bajir enters his cell, thinking his plan worked. Terril tosses handfuls of roaches onto Bajir, panicking HIM! The thralls see their master in panic and snap back to their old selves and hurl Bajir from the window of his castle.

Gerald is the new English secretary to millionaire Raj Simha of an unnamed Indo-Asian country. Gerald is warned to stay away from the Raj’s daughter Kaleli. But Gerald delivers flowers and breakfast in bed to Kaleli, walks with her in the garden and falls in love.

Simha refuses to allow Gerald to marry and forbids any further contact.

Gerald steals money and gems from Simha’s vault to raise enough money for two tickets back to England. Simha catches Gerald and is killed. Simha’s guards attack Gerald but are pulled back by many arms. It is Kaleli – she is the ten-armed goddess of death – Kali! She hugs Gerald with all her arms, crushing him. She tells the guards to call the police and report two dead bodies…

Unexpected Mail: the letter column does not necessarily comment on previous issues, but instead, like Ghosts, readers submit brief tales that fit the genre of the comic. Damian Brokaw of Denver, CO tells us of pygmy chimpanzees – the possible missing link! Janet Fadel of Hollywood, CA notes that issue #172 features an exorcism as well as an article about the upcoming film “Exorcist 2” and discusses the film, Robert W. Chan of Edmonton, Canada writes about a 1969 case in Louisiana when water turned blood red.  Ronald Vias of Dover, NJ discusses an Allied WWII plan to plant incendiary devises on nocturnal animals and bats and sic them on Nazi strongholds.  Other articles discuss upcoming movies about the Loch Ness Monster and “Dr. Black and Mr. Hyde”.

Join me next time for DC’s Bicentennial issue #29: Detective Comics #461