Sometimes I love the internet. I also love the Facebook pages I have joined. I am on a LOT of Facebook pages dedicated to comic books. I post my blogs on them and get some wonderful responses and and have made friends with my fellow posters

My most recent blog post – part of my series on DC Salutes the Bicentennial comics from July and August of 1976 – was about the last comic: #33 – DC Super-Stars #5 and commented about the golden age Flash strip contained therein.

Here is what I posted on some of the Facebook pages I frequent:

I discovered an odd thing in two Flash reprints from the 1940s: DC decided that our eyes would not be able to withstand the “poor” original art from the golden age, so the story was redrawn in the “modern” style. This was done with a golden age Flash story in Four Star Spectacular #1 and the letters taking them to task for doing so (in the letter page of a later issue) would make you think they wouldn’t do it again. Nope…
They did it again in a golden age Flash reprint in DC Super-Stars #5.
In comics from years previous it was explained that reprinting golden age stories were hard to do because of the poor reproduction technology at the time. That makes more sense and we the people would likely accept that as a more logical explanation (although still BS).
As far as I can tell they only did this twice. Perhaps the third time was not the charm and boomeranged on the editor. Keep in mind the publisher of National comics once drew the Golden Age Flash strip.
“Mr. Infantino, let’s redraw this Flash story, the art is abysmal compared to our modern artists!”
“I drew that originally.”
“… … … I’m fired, aren’t I?”
“Yep.”

Here are the two comics in question: 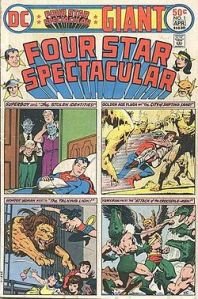 Here’s the wonderful part: after I posted all that another member posted the splash page from the original Flash story from All-Flash #22, May 1946):

and I immediately photographed and posted the redrawn splash page:

And with some cheesy photoshopping I put the two pages together:

Fun stuff! Thanks for reading!