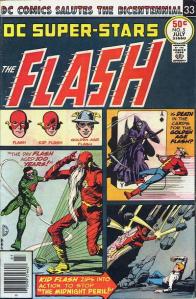 DC Super-Stars was an anthology series published from March 1976 until February 1978 lasting 18 issues.

It began as a reprint series (such as this Bicentennial issue) but as of issue #12 began printing original stories.  Teen Titans, Aquaman, the Legion of Super-Heroes, Zatanna, Adam Strange (these were titled DC Super-Stars of Space and also featured the Atomic Knights, Captain Comet, Space Ranger, etc.) were some of the headliners. New stories included Strange Sports Stories (heroes and villains play a baseball game. Uncle Sam umpired), Superboy (that issue was a best seller and revived an interst in a solo Superboy series), a Sgt Rock/Unknown Solder team-up, a Phantom Stranger/Deadman Halloween team-up, the debut of the Star Hunters (an excellent forgotten comic book series) and origin issues featuring various heroes and villains (including the debut of the Huntress in #17).

This Bicentennial issue features the Flash.

Scientists at Centralia University have created an aging formula. The Top steals the vial containing the liquid, intent on using it on Flash, It will age the Scarlet Speedster and force him to retire as old athletes do.

The Top raids the Flash museum and is stopped by the Sultan of Speed. Top hurls a grenade at his adversary. When it goes off, Flash ages 100 years! He has a long beard and his costume droops on him. Top easily beats Flash with a punch.

But it is all a ruse. Flash vibrated through the toxins and disguised himself at superspeed to trick the Top! But no matter how many times he encounters (and is beaten by) the Top, Flash still cannot find the vial of the remaining aging formula.

The Top’s vibrational weaponry combined with the aging formula now causes Flash to evolve as well as age (how can this be when it was a ruse? Quiet…). His head grows as his mind evolves! He attacks Top with his mental prowess. Top escapes – and realizes that with the formula and his tops he can evolve himself into Super-Top! He takes the formula from a hollow leg of a table. Flash snatches it away before Top can use it. Flash’s evolving into a higher being was a ruse (but … I said quiet!)! Magnets and superspeed helped create the illusion of the Future Flash! Flash thanks museum guide Dexter Miles for his acting and make-up expertise in capturing the Top! 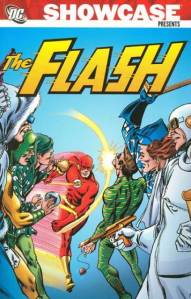 To join a high school fraternity, Wally West and Peter Willard must stay in a haunted house until midnight.

Discussing Kid Flash to pass the time (Peter: “Do you really think he can do all that super speed stuff?”) they see two figures in ghostly garb who demand they leave! The boys bolt from the house. Thile Peter keeps running, Wally dons his Kid Flash garb to investigate. Sure enough, the ghosts are merely two crooks scaring the kids away from their hideout! Kid Flash puts on the ghostly disguise (a sheet with holes in it) and with his superspeed haunts the crooks with dozens of “real” ghosts! The crooks flee with the “ghosts” chasing them. Kid Flash herds the crooks into police headquarters where they happily surrender.

And they’d have gotten away with it, too, if it wasn’t for those meddling kids…

Meanwhile, a panicked Peter catches his foot between rocks at the bottom of a tall rocky hill. Lightning from a summer storm strikes the hill and causes an avalanche. Kid Flash deflects the stones and rescues Peter. Peter goes back to the “haunted” house where Wally tells him Kid Flash appeared and sent the “ghosts” to police HQ.

The boys are welcomed into the fraternity, having passed their test (although technically they DID leave the house before the deadline …). 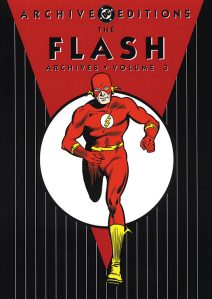 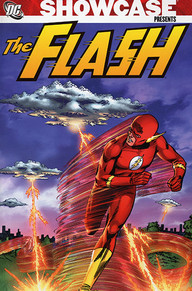 A one-page feature describes the history of measuring the speed of light. Even I understood it!

This is reprinted from Strange Adventures #15 (December 1951) 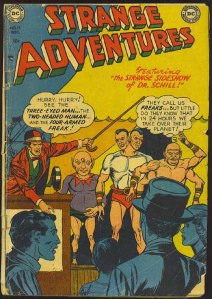 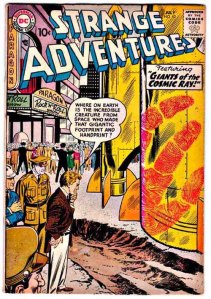 Nearly a half-century (actually 44 years) before the X-Men’s Gambit, Ace Wolfe could also throw playing cards with deadly accuracy. After his crimes in the west coast made things too hot for him, he returned to Keystone City and met up with his childhood friend, professional gambler Deuces Wild. Deuces was an “honest” gambler and didn’t want any part of Ace’s crimes, but Ace left him no choice. Deuces sent a secret message to Joan Williams about Ace’s upcoming crime.  Joan, you see, is rumored to have an “in” with the Flash (she is unknowingly the girlfriend of Jay “Flash” Garrick).

Flash stops Ace from his robbery, but Ace and gang manage to get away. Ace suspects Deuce of finkery and keeps him captive for their next crime.

Fortunately Jay discovers Ace’s next move while buying a costume for a masked ball. Seems the saleslady said there was a big demand for mailman uniforms for the big postal workers ball. Why would postal workers need mailman uniforms? Sure enough, Flash stops Ace from robbing the party-goers and sends Ace to prison after rescuing Deuces.

DC apparently decided that our eyes would not be able to withstand the “poor” original art from the golden age, so the story was redrawn in the “modern” style. This was done with a golden age Flash story in Four Star Spectacular #1 from three months before and the letters taking them to task for doing so (in Four Star Spectacular #3) would make you think they wouldn’t do it again. Nope…

In comics from years previous it was explained that reprinting golden age stories were hard to do because of the poor reproduction technology at the time. That makes more sense and we the people would likely accept that as a more logical explanation (although still BS).

Let’s not put the onus on Rico Rival – who did a great art job on a thankless task. It wasn’t his fault, folks, give him some credit here… But still, it kind of smacks of “Star Wars Special Edition” – the original was probably just fine.

Here are the splash pages of the original and the redo: 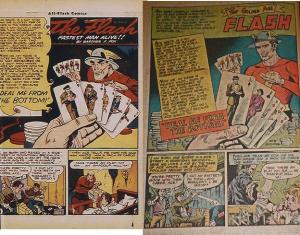 Keep in mind the publisher of National comics once drew the Golden Age Flash strip.

“Mr. Infantino, let’s redraw this Flash story, the art is abysmal compared to our modern artists!”

“I drew that originally.”

A text piece “A Zip of Super-Speedsters” (writer unknown) discusses all the speedsters, good guys and bad, in the DC Universe – both Flashes, Kid-Flash, Johnnie Quick, Joanie Quick, the Reverse-Flash.  But not Rival (one of the last villains of the Golden Age Flash’s run). This leads me to believe Bridwell did not write it – surely his encyclopedic knowledge of all things comic books would know about the Jay Garrick villain…

One thought on “The last Bicentennial banner comic … DC Super-Stars #5, a Flash in the pan?”