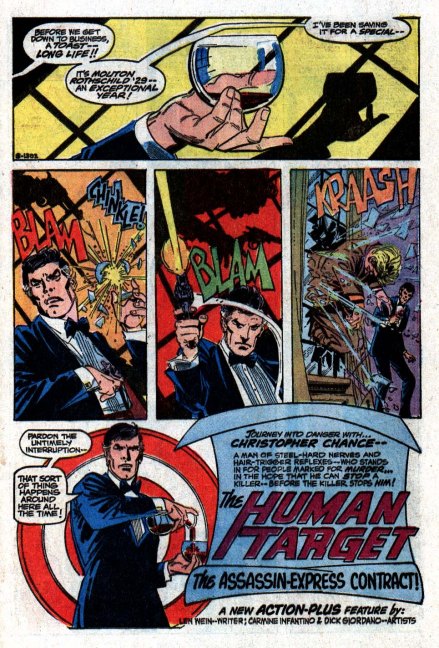 From Wikipedia: “Christopher Chance, first appears in Action Comics #419 (December 1972), and was created by Len Wein and Carmine Infantino. This character, a private investigator and bodyguard who assumes the identities of clients targeted by assassins and other dangerous criminals …”

In the Bronze Age he appeared in Action Comics, Brave & Bold, Detective Comics and Batman. He was given a one-shot comic based on the 1991 TV show, and a six-issue miniseries based on the woefully ignored 2010 TV show. A Vertigo imprint title ran for 21 issues and a Special.

From DC Wiki: “Christopher Chance practices his skills on a private sound-proofed shooting range inside his Boston apartment. His close friend Luigi brings in a Mr. Smithers who wants to hire the Human Target for a case. Smithers works for Horizon Chemical Corporation and has accidentally hired a killer to murder his boss T.C. Newman, although he only intended to engage in some industrial espionage. He is hiring the Human Target to get the murder off his conscience. Chance takes the executives place on a train to California where he knows the assassin will strike, and figures out that his assailant is posing as the conductor. After dealing with a bomb in his compartment, he gives chase to the man and they end up fighting on the top of the car. Chance activates the emergency break with a gadget in his cufflink, and the hitman goes flying off to his death. Later, Smithers is relieved that they were successful, but he also loses his job when his boss discovers what happened.”

Infantino’s art, sometimes an acquired taste, is fantastic here! Giordano smooths the sharp edges for which Infantino’s art is most criticized. And the story sets the stage for future Human Target stories. A great beginning!

Plus this story has the honor of being reprinted in the special edition of Action Comics #1000! 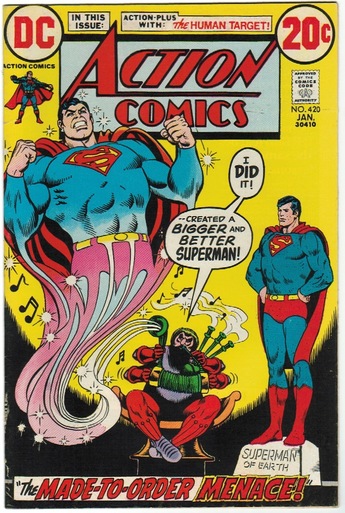 “The King of the Jungle Contract!”

From DC Wiki: “Christopher Chance is hired by famous hunter Gunther King, who believes that his rival Ernest Holoway is trying to kill him. The Human Target travels around disguised as King on safari in Kenya, dealing with traps that have been set for him. After fighting a lion and a buffalo, he gets into a gunfight with the hidden Holoway, but King steps in and apparently kills his nemesis before he can shoot Chris. Chance examines the body and realizes that Holoway had been murdered beforehand, the whole thing was an elaborate plot for King to get rid of his competition. The two men struggle, and Gunther King fires his muddy rifle which explodes into his face. The hunter falls backwards into a river, and his body washes away.” 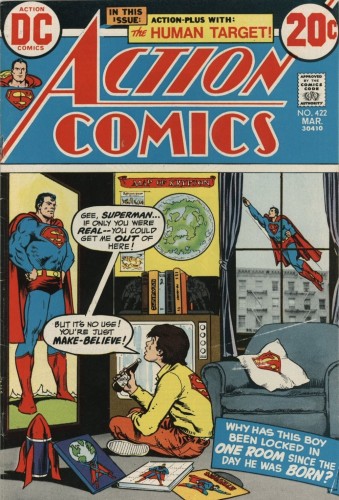 From DC Wikia: Christopher Chance takes on Hyram Walsh as his client, a man who is being pursued by a ruthless killer with ties to Chance’s past. The assassin is the same man who killed Chance’s father. He takes on the case for nothing because the man can’t pay, and reflects on his origins.

Many years ago, when Christopher was a young child, his father Philip Chance struggled to provide for his family. In his desperation, he took out a loan from local gangster Amos Sharkey to invest in the stock market, but lost it all and was unable to pay. To send a message to others who couldn’t settle their debts, Sharkey sent a hitman named Dancer to kill him. One night while the two were walking home from school, they were cornered by Dancer in an alleyway. Chris leapt to defend his father, but was swept aside. His father sobbed and begged for his life, but was shot without hesitation. Strengthened by his own rage, Christopher tackled the murderer to the ground and nearly choked him to death before police sirens came. On his deathbed, Philip Chance told his son that he had to make something of himself, and be successful, like his dad never could. Christopher Chance watched his father die before his own eyes, and felt terrible that he couldn’t save him. He swore that as long as he could prevent it, nobody would ever have to suffer that kind of fear and humiliation again. That night, something changed inside of him, and he found himself completely unable to experience fear. He spent the rest of his life training himself to the peak of physical perfection, preparing himself for the dangerous path that lay ahead. Christopher Chance would become the Human Target.

(The flashback about Chance’s origins is reprinted as part of another Human Target story in Brave and the Bold #143 featuring another appearance by Amos Sharkey.)

The annual statement says that issues of Action Comics were selling around 542,000 copies!

The Human Target’s other Action Comics appearances are detailed here.

One thought on “The Back Pages: The Human Target (part 1)”