Billy Batson and Uncle Dudley travel to Ft. Pitt in Pittsburgh, where they discover that Doctor Sivana broke into the facility and stole a copy of a DC Comics comic book. In his hidden lair, Sivana reads about the adventures of Superman and decides to create his own Man of Steel. He produces a robotic brain and then dumps it into a smelting vat at a local steel factory. The molten metal forms around the robotic brain, taking the form of an old folk hero, Joe Magarac.

As Joe Magarac begins sabotaging the steelworks, Billy Batson changes into a Captain Marvel and confronts him. He punches him through the ceiling, but Magarac comes back and later captures the hero while he is in his human guise of Billy Batson. Sivana has Magarac place a metal gag across Billy’s mouth, but Billy manages to trick Joe Magarac into removing it, thereby allowing him to transform back into Captain Marvel (Actually he wrote a note calling Magarac a big ape, Magarac nearly breaks Billy’s jaw punching him and knocking off the gag).

Cap defeats Magarac, but Sivana creates steel animals to destroy ever steel mill in the area!

Captain Marvel uses the eterni-phone to consult with the elders. The spirit of Atlas informs Marvel that he will need the aid of the entire Marvel Family to stop Sivana’s scheme. Captain Marvel flies across the country and rounds up Captain Marvel, Jr., Mary Marvel and the Lieutenant Marvels. They all return to Pittsburgh and shatter the steels animals. Captain Marvel has one final showdown with a steel Superman, defeats him and apprehends Sivana.  Seems the Superman of Steel was made of a special formula created by Sivana. This super-steel will help him rule the world! Fortunately for the world, Captain Marvel snatches the formula from Sivana’s hands to be used for good …

The letter columns were all positive – still praising the new format and the return of Black Adam – who has over the past forty years been the most durable of Captain Marvel’s villains!

I still have my original copy of this comic – I was enthralled with it! Superman appears – kind of … and I learned about Joe Magarac, a folk hero I had never heard of! In these days of the internet, Magarac research is made easy – Google it! 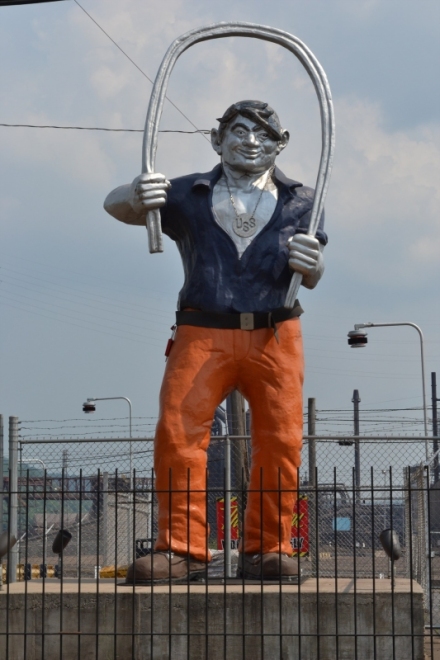 Per my research, and I might be wrong, this is the first appearance of the Lieutenant Marvels since the Golden Age (flashbacks and cameo panels aside). Of course, they were retconned out with the Crisis…). It took me well into the 1990s to get “Hill Billy”.