(I’ll keep the spoilers to a minimum and give you fair warning, but there’s nothing in this blog that you can’t find online elsewhere …)

I tend to see movies late in their runs. I don’t like crowded theaters so I usually wait until week two or three when the general masses have seen it once and the uber-fans have sated themselves during the week. Thus is this late review of Avengers: Age of Ultron.

And not a review as such, more like some random thoughts akin to my blog on Guardians of the Galaxy.

Avengers Age of Ultron is doing very well. It is the biggest money-maker of the year so far and has grossed a billion dollars internationally.

It certainly doesn’t need me blogging about it to hype it. Fans will go see it whether I like it or not. And I did like it. A lot.

It was just like an Avengers comic book from the 1970s.

What is that nagging feeling I have in the weeks after seeing it? There was something about the movie while I was watching it and afterwards that keeps pecking … and I think I finally know what it is…

I certainly loved more of the movie than I disliked: casting James Spader as Ultron was a genius move – the casting director deserves a bonus! He probably already has gotten more than the artists and writers who created the characters in the movie … but that is another argument.

And the battle scenes and special effects are grand. 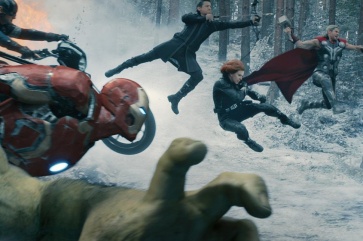 I especially enjoyed the human elements of the movie – and the humanity shown by the characters – going out of their way to save innocent lives. Captain America’s line “I asked for a solution, not an escape plan” said more for heroism than any scene from the Man of Steel…

Plus we finally get to see more of Hawkeye and his personal life – the one character from the first movie that had no real back story. An excellent one was provided.

The things I didn’t like about the movie were not what was niggling at me. These things didn’t ruin the movie for me; rather they made me go … “What?”

Maybe I wasn’t paying attention, but I was lost at the creation of Ultron. The McGuffin of this movie – apparently required in all Marvel/Disney movies – was the stone in Loki’s spear. Somehow the stone contained an artificial intelligence that Tony Stark and Bruce Banner injected into their Ultron defense system and thus activated him.

Somehow the system was imbued with Tony Stark’s personality (Ultron was referred to as an “anti-Stark” a few times). That left me scratching my head a bit. Was it because he took over Jarvis’ mentality and Jarvis had a bit of Stark’s personality? Did I miss or forget that from a previous Iron Man flick?

Regardless, it worked; James Spader’s voice-work perfectly emulated Robert Downey Jr’s vocal inflections and mannerisms. In another reality he could have been cast as Tony Stark/Iron Man. Brilliant stuff. And while he didn’t steal every scene he was in as was the case in the first movie with Tom Hiddleston as Loki, Spader/Ultron made a memorable villain.

(Small Spoiler Alert) And the romance between Black Widow and Bruce Banner didn’t bother me. After Star Trek 5: My Eyes! Out Vile Jelly!’s fling between Scotty and Uhura, nothing like that bothers me anymore…   But I will say this – if Scarlett Johansson whispered to me that it was sundown and started rubbing my hand the last thing I would do is calm down…

But none of that bugged me. I put my finger on the problem some days later while trolling my wall on Facebook. “Did you catch these Easter Eggs in Avengers: Age of Ultron?” shouted one article. I did not read the article, because it was my eureka moment – the problem I had with the movie hit me:

The movie was burdened with being the gateway to future Marvel movies. It gave the film an “in-betweenness” it would not have had otherwise. With the exception of Godfather II, most sequels stink, especially when compared to the first and sometimes third movie. Two words: Indiana Jones. Even The Empire Strikes Back suffered from its “in-betweenness”. Great as it was, it was still the opening act for the third movie (and what a stinker that ended up being). Like the Pirates of the Caribbean and Matrix franchises, Movie 2 was basically part one of two.

Even before Age of Ultron’s release we knew what was going to happen next. Not just the Ant-Man movie, but we knew the next Avengers film will adapt the fantastic Infinity War storyline – and do it in two movies! A Black Panther movie is in the works. Captain America’s next movie will adapt the equally fantastic Civil War storyline and may give the now-aging stars of the Captain America and Iron Man franchises an excuse to bow out with a bang. Literally.

Age of Ultron crams all that in. They do not take away from the film to do it; which is why it clocks in at two and a half hours.

And I’m not talking about the now-mandatory mid- and post-credit teasers. Those are just that – teasers to thrill you as to what comes next (except for Thor the Dark World – I stuck around twenty minutes for THAT!? I could’ve been home by now).

So there’s nothing wrong with end-of-the-movie teasers. “James Bond will return…”

Remember when I said the movie was much like an Avengers comic book in the 1970s? Back then the comics would have a panel or two foreshadowing what is to come. “Who is that mysterious figure lurking in Avenger’s mansion? We’ll find out next issue, pilgrim, ’cause right now it’s back to the ACTION…” Age of Ultron was burdened with them, and I do mean burdened:

Thor’s illusion leads us to the next two Avengers movie and foreshadows his own next film; Captain America’s illusion reminds us to watch the next season of Agent Carter; the ending of the movie  – heck, the entire introduction of the new Avenger members – sets up Civil War. Our heroes go to Wakanda and fight a bad guy (played by chameleon Andy Serkis) to set up the Black Panther movie.

Even before Age of Ultron was released we the people knew about the next Avengers and Captain America movies. By this time during the first Avengers movie we the people had no idea what the next movie was about – it wasn’t until August 2012 that were even given the title. Age of Ultron was the forgotten middle child even before it hit the theaters.

Oh, I’ll go see the next movies, don’t worry, but I wanted to see Age of Ultron.

Too many moving parts leading in too many directions. That was what was nagging me.

And even Age of Ultron’s post-credit teaser was a let down. What was the real difference between this one and the teaser from the first Avengers movie?

This was a meme posted on my Facebook wall: 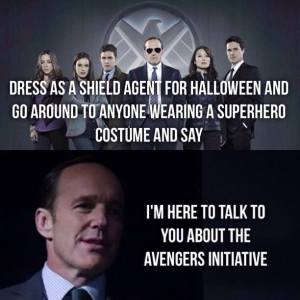 And I responded: That’s the movies, though. If it were the TV show “Agents of Shield” it would be, “I’m here to ask you a question, but I won’t ask it until the end-of-season cliffhanger. When you answer six shows into the next season I will say, ‘and now for the follow-up question…’ which will not be asked until that next year’s cliffhanger, and if we’re renewed…” The movies aren’t getting that bad, but they planted those seeds too. It’s getting to that point.

Let the next few movies worry about themselves. And in the meantime, let me enjoy Age of Ultron.

Footnote: As is usual with sequels TV networks aired the first Avengers movie to whet our appetites. I Tivoed the movie and watched it with my 5-year-old-daughter. Her gasp when Thor was first on screen is a memory I will cherish to my dying day. She says Thor is the best good guy ever. She (along with billions of others) laughed when Hulk beat Loki into the ground – after many minutes of explaining that Loki was a bad guy) and still loves watching Thor, Iron Man and Hulk beat up the “big fish”. At first she called Iron Man Flash and now she’s reversed that.

Although she likes the scenes with Hulk, she is starting to identify with Black Widow. Thor is still her favorite. I hope it’s because Daddy cosplays as Thor… 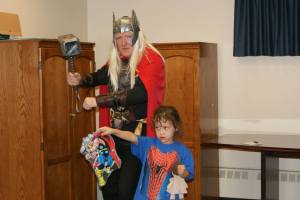