Do You Dare Read … 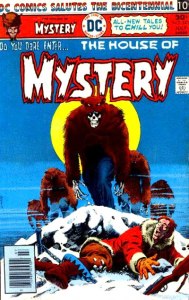 House of Mystery was the most successful of the many excellent horror anthologies DC released in its catalogue. The first issue was published in December 1951 and lasted 321 issues until (appropriately) October 1983.  There have been various revivals of the title since with mixed success.

Because of the Comics Code, HoM changed formats in the mid-1950s to more science fiction/suspense stories.  It soon became a home to superheroes – Martian Manhunter and Dial H for Hero mainly. By July 1968, the Code weakened its grip allowing DC to hire Joe Orlando to bring the magazine back to horror stories with issue 174 (a reprint issue – new stories resumed with #175). #175 introduced the House’s caretaker, Cain, whose own “adventures” occasionally book-ended the issues. He would introduce most stories and provide a comment in the final panel. 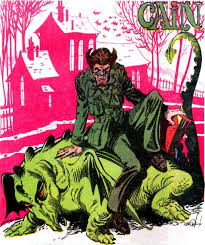 In his resort in the far north, he used his airplane to hunt down and chase polar bears. He would land after the bears were tired out to shoot them for trophies. His manservant, the Inuit named Umiak, protested. This got him a smack from Hunt for his trouble…

Hunt finally found the huge bear rumored to be in the area – the biggest on record! He chased, it, shot it, decapitated it and took the head to be stuffed as a trophy. When the taxidermists opened the crate they found the head … of Umiak!

Sid and Millie Barnes were found dead on the beach.

Flashback to Sid finding Millie on the boardwalk after hours in front of her favorite attraction – the fortune-telling machine containing the wooden mannequin of a Gypsy King. Sid begs her for $2000.00 – the last of her inheritance for yet another “investment” scheme.  After an argument she relents and gives him the money.

The Gypsy King dummy falls over and Millie sets it upright again. A fortune card pops out of the machine: “24 Black Gets It All Back”.

They argue on the beach. Sid knocks Millie down, killing her accidentally. Since no one would believe it was an accident, he buries her on the beach. A third party sneaks behind Sid and kills him! The police find tracks in the sand leading to and from the boardwalk and the fortune telling machine. The Gypsy King’s shoes are filled with sand…